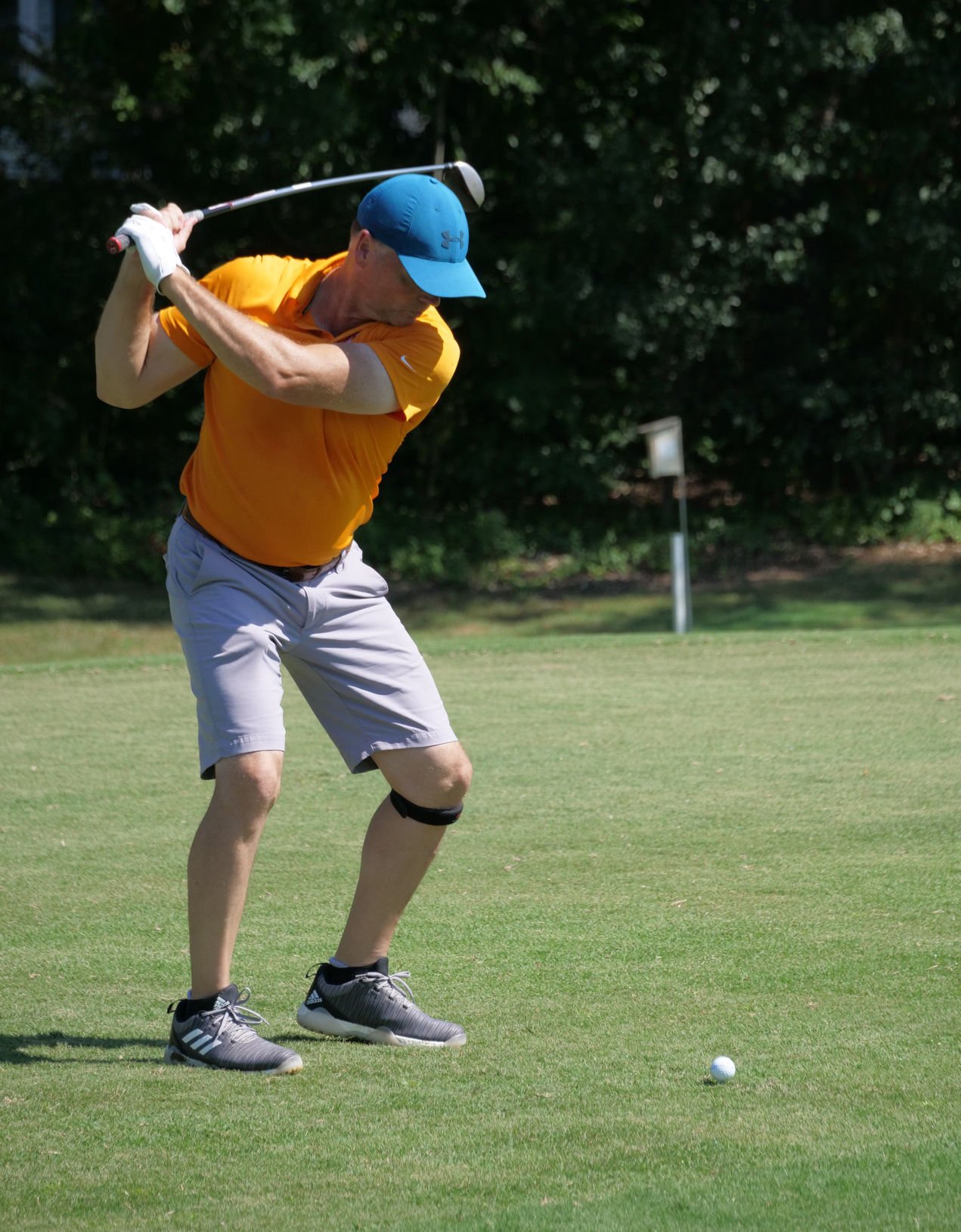 Scott Riggs tees off hole No. 2 Saturday during the Veterans of Foreign Wars Post 12135 Golf Tournament at Toqua Golf Course. 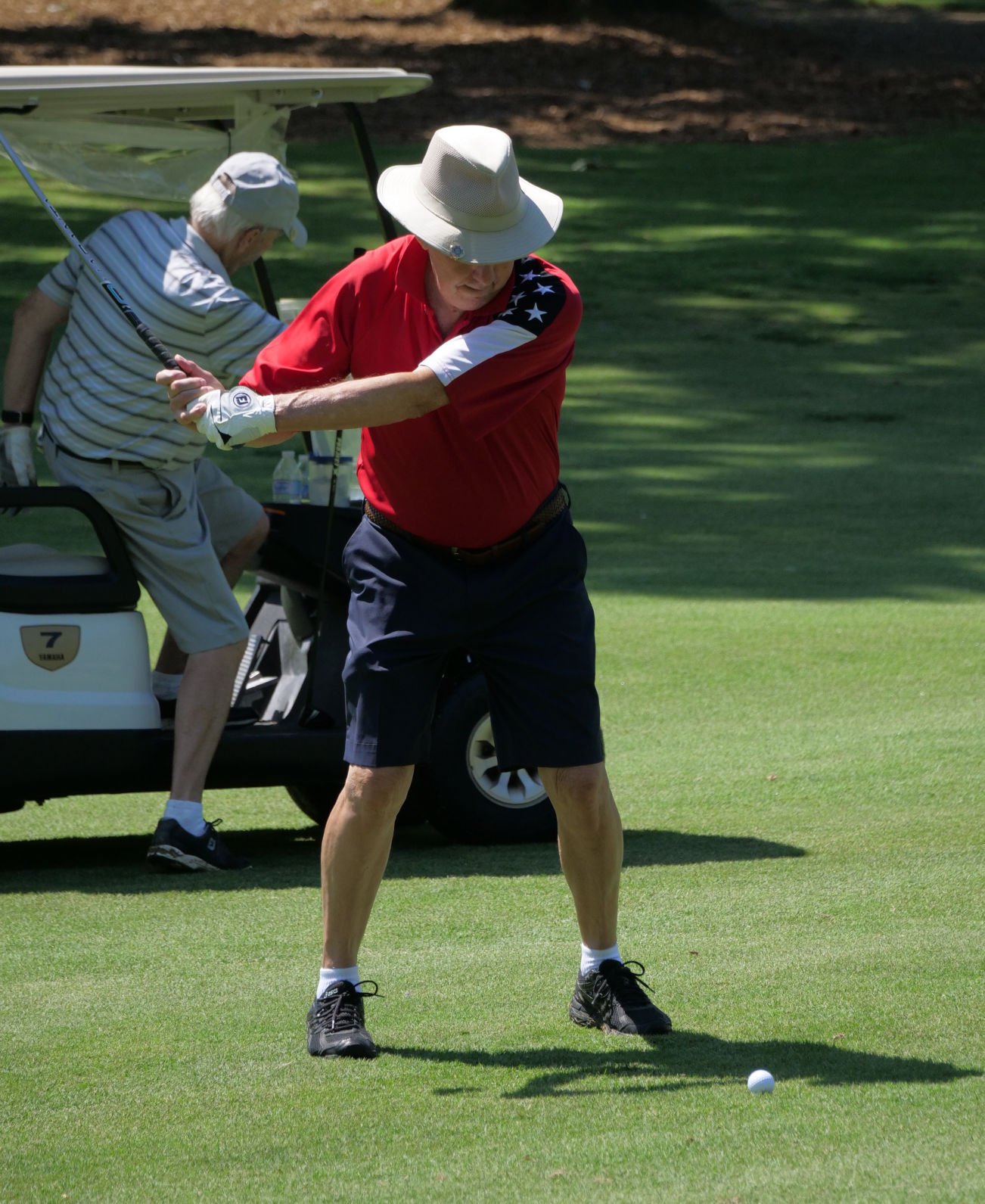 Scott Riggs tees off hole No. 2 Saturday during the Veterans of Foreign Wars Post 12135 Golf Tournament at Toqua Golf Course.

The weather was perfect Saturday as dozens of golfers from Tellico Village and the greater Knoxville area descended on Toqua Golf Course to play in the second annual Veteran of Foreign Wars Post 12135 Golf Tournament.

“This is our second year of the tournament, and since we’re only a four-year post and have just started, it’s our major fundraiser for us every year,” Ed Frandle, VFW junior vice commander, said. “The turnout was we had 21 teams, 84 players this year, which was an increase from what we had the last time.”

Golfers paid a $65 entry fee, which included lunch and a drawing for various prizes. The 19th hole featured Toqua’s new Trackman 4 software where golfers attempted to shoot on a virtual par-3 hole for a closest-to-the-pin competition.

Participants were also able to take part in a silent auction.

“We’ve added a new wrinkle with the tracker, which is really cool,” Frandle said. “A lot of people have never been on that, so we thought we’d expose them to that. We had a very good response from a number of sponsors throughout the area. We ended up with 27 sponsors and three different levels — Medal of Honor, Silver Star and Bronze Star. It’s a big deal as far as the post is going.”

Organizers believe the tournament was a “very successful” event during the COVID-19 pandemic.

Michael Timmer, local VFW public information officer, believes the tournament could yield close to $10,000. A final total could not be determined by The Connection presstime.

“Tellico Village does a really good job of sanitizing the carts, and yeah, it’s obviously affected our operations,” Timmer said. “Golf has gone on through COVID because of the measures that they’re taking to keep safe. Carts are sterilized and the fact it’s outdoors hasn’t really affected it too much. The purpose is to raise money because it’s our major fundraiser event of the year, and we raise money specifically for helping veterans. All of the proceeds go to helping area veterans who are in need.”

The pandemic forced VFW to cancel multiple meetings and events during the spring and early summer.

“We’ve had to cancel a bunch of events like the Buddy Poppy event for Memorial Day, which is also another major fundraiser,” Timmer said. “We’ve had to cancel some of our meetings, but we started meeting outdoors. There’s been a few other events that have been canceled.”

VFW Post 12135 recently was named as a VFW All-American post for its consistent service in the community.

All-American status is meant to recognize outstanding VFW posts and is based on participation in VFW programs as well as membership gains by posts, districts and departments.

“We have been recognized as an All-American post after four years,” Frandle said. “What that means is there are over 6,000 posts worldwide, and only 291 were recognized as All-American this year, and we were one of five in Tennessee. Being that we’re just starting our fifth year, it was a big deal. We worked hard for it because it involves a lot of community activity.”

VFW Post 12135 representatives have worked extensively with schools in Loudon County and hope to continue providing scholarship opportunities for students this year.

“There are three programs in the school systems that we support,” Frandle said. “One is called Patriot’s Pen, which is for middle school children. We had 90 entries to write an essay about a given subject. The Voice of Democracy is the high school level where they have to record a three- to five-minute speech, and we had four there. We had three Teachers of the Year that we presented this year, and then those go onto district. Out of the district, we ended up with five or 10 people in the district ... but there’s about $900,000 in scholarships for these kids, so it’s pretty significant.”