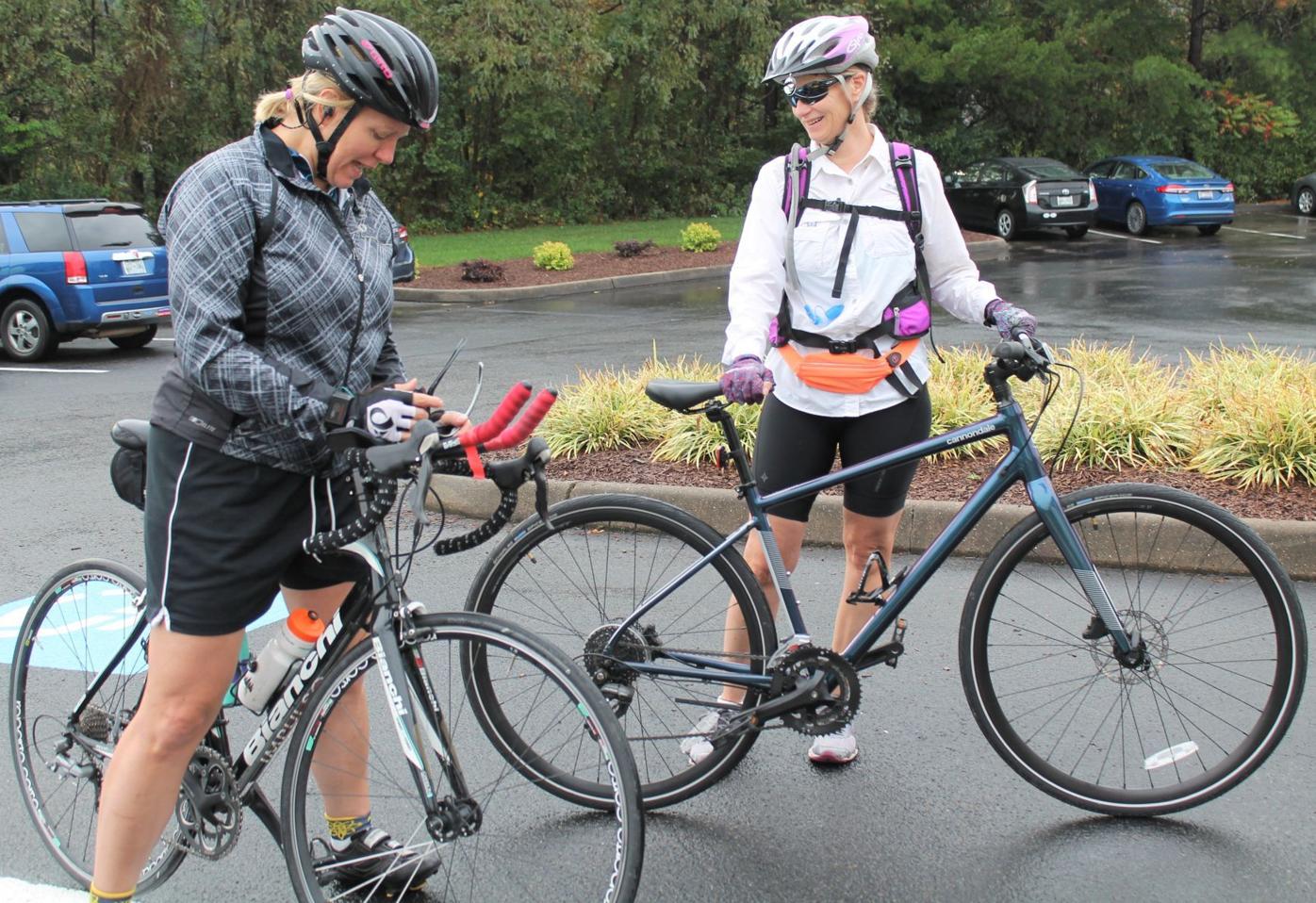 Amy Henry, left, and Kim Gill talk about bikes Saturday while waiting for the Tour de Tellico to begin. 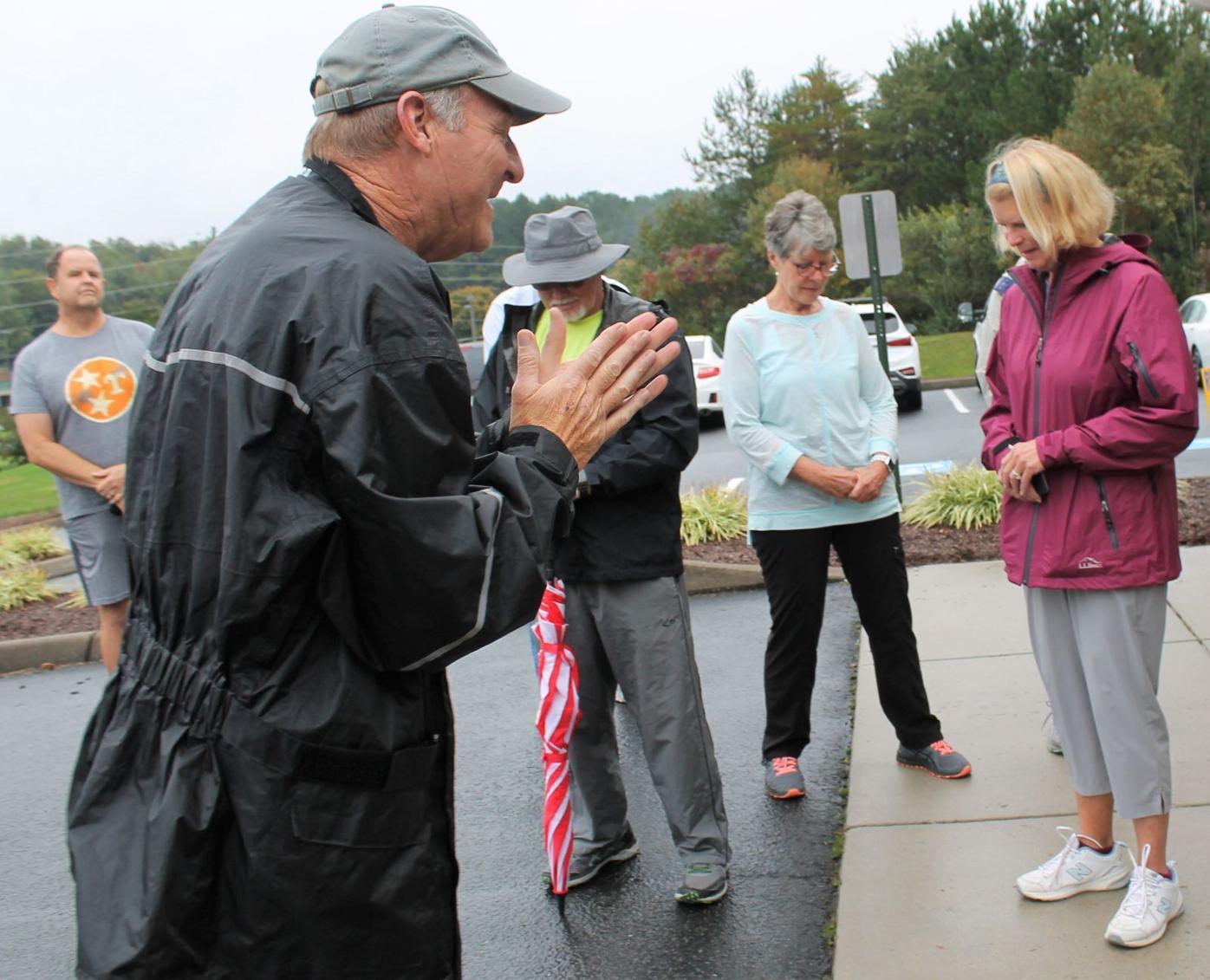 The Rev. Charlie Barnard, First Baptist Church in Tellico Village pastor, left, prays over the first round of walkers in the Trek de Tellico.

Amy Henry, left, and Kim Gill talk about bikes Saturday while waiting for the Tour de Tellico to begin.

The Rev. Charlie Barnard, First Baptist Church in Tellico Village pastor, left, prays over the first round of walkers in the Trek de Tellico.

Fourteen years ago, the Rev. Charlie Barnard, First Baptist Church in Tellico Village pastor, said he created the ride as a way to “put First Baptist on the map” because when he first came to the area not many knew there was a Baptist church. Barnard had experience starting rides in South Carolina where he held a similar long-distance bicycle ride in 2001.

“I did it myself the first two or three years,” Barnard said. “It got to be too much for one person. Then Tellico Lake Rotary Club took over, and I was glad to hand it over to them. They’ve been running it ever since, and it’s raised quite a bit of money over the years for different charities. We began it just as a bicycle ride just from Tellico Village to Tellico Plains and back, thus the name Tour de Tellico. So in those early years, the ride was between the two Tellicos. It’s since expanded into multiple rides.”

Riders can now choose from a 25K, 50K, 100K or 100-mile ride. Not only have the routes expanded, but the outreach of the tour has also expanded.

“We get bikers from all over East Tennessee and beyond — North Carolina, Georgia, and sometimes people even come down from Michigan,” John Everson, Tellico Lake Rotary Club membership chairman, said. “They’ll be visiting people, and they’ll make it a point to be here the weekend we have Tour de Tellico.”

Everson never knows how much the ride will raise but with nearly 100 cyclists, he hopes for $4,000-$5,000. A final amount could not be determined by The Connection presstime.

“We use it to help fund the scholarships we give out to high school kids, either two or three every year,” Everson said. “Then we’ve created like a grant program, and we support (Good Samaritan Center of Loudon County), (Good Shepherd Center of Monroe County). We will send kids to a Rotary leadership program that we have called RYLA. That takes place usually in the fall. … We support (Dolly Parton’s Imagination Library), Joy of Music School. Those are just some of the groups. … We also have an international project called Friends of Momance in Haiti.”

Everson said registration numbers were up from last year’s ride despite coronavirus concerns. He believes this was due to other rides being canceled making the Tour much more important to riders. Cancellation was never an option.

“We planned it thinking that this COVID really would have died down by now,” Everson said. “But the point is even though COVID hasn’t died down, I think we all know how better to handle it, how to social distance and all. So I think we’ve all learned a lot from that. That’s why instead of canceling it, we’ve said, ‘Let’s go ahead with it. People need things to do.’ This locking down hasn’t been good.”

“In the first years, back in 2006 and 2007, we did have a walk with it because in Tellico Village there’s probably more walkers than there are bicyclists,” Barnard said. “So we did that as a way to get more people involved. They brought the walk back this year to help raise funds for Our PLACE which is the Alzheimer’s respite care we’re trying to build out here. … I’m excited about that because there’s quite a few people who wouldn’t mind doing a walk, but not everybody owns a bicycle who can go 50 or 60 miles. Not everybody wants to ride a bicycle that far.”

Adding the Trek gives people in the Village, Rarity Bay and WindRiver a chance to participate, whereas the Tour draws in “young people” from outlying areas, Everson said.

Glennie Browne, Villager and Trek de Tellico participant, was one of many to show support despite the morning’s spotty rain and overcast clouds.

“I think it’s great to have more opportunities for different people to participate in what they’re comfortable with. I think it’s fabulous,” Browne said. “I think (Our PLACE) is a much needed service, and I think it’ll be a blessing to the Village, for sure, for really everybody involved.”

The events serve multiple purposes to the individual and the community, Barnard said.