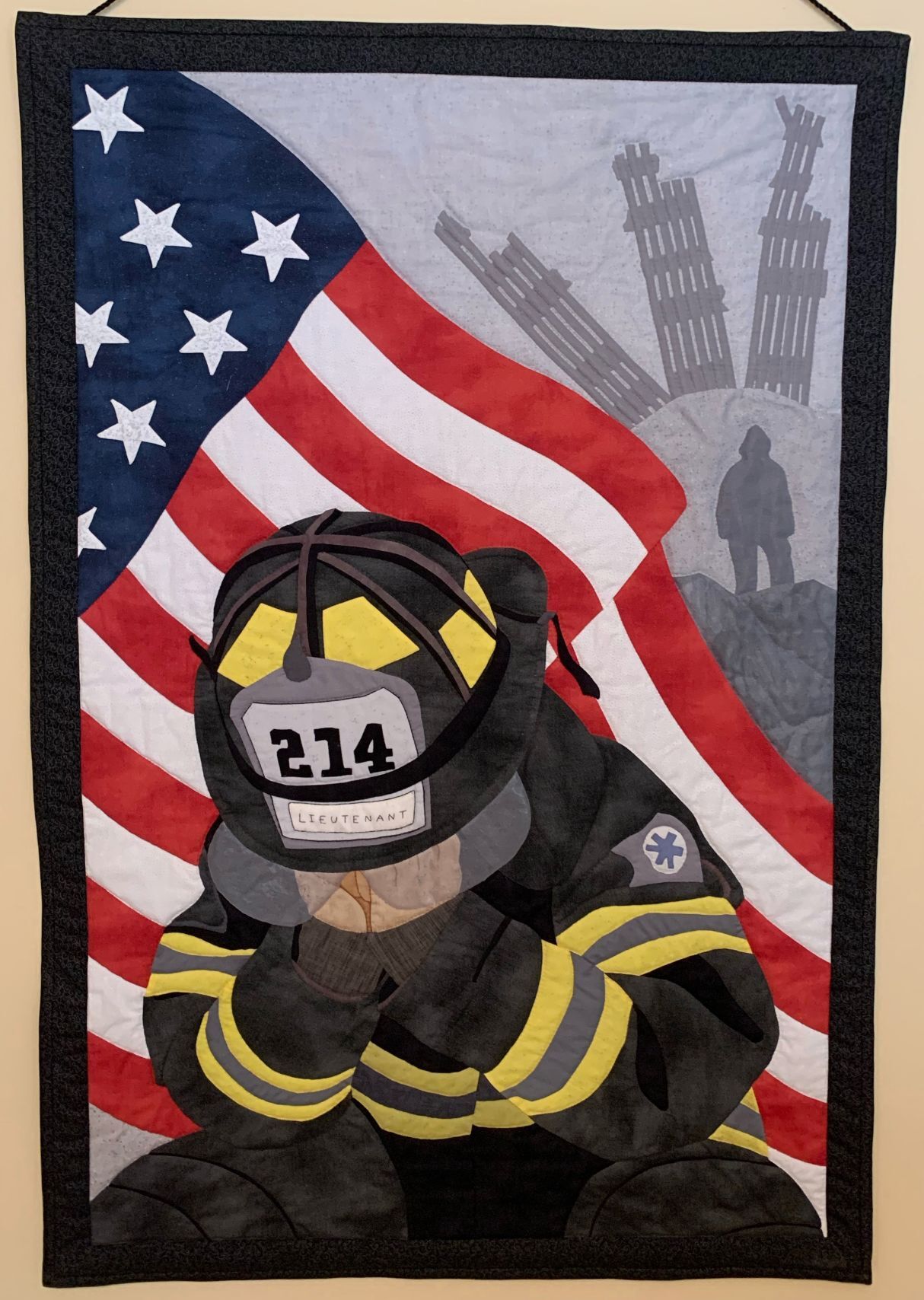 This Sept. 11 quilt by Tellico Village quilter and sewer Mamie Ringenbach shows a New York City firefighter who was grief-stricken after the World Trade Center collapsed. 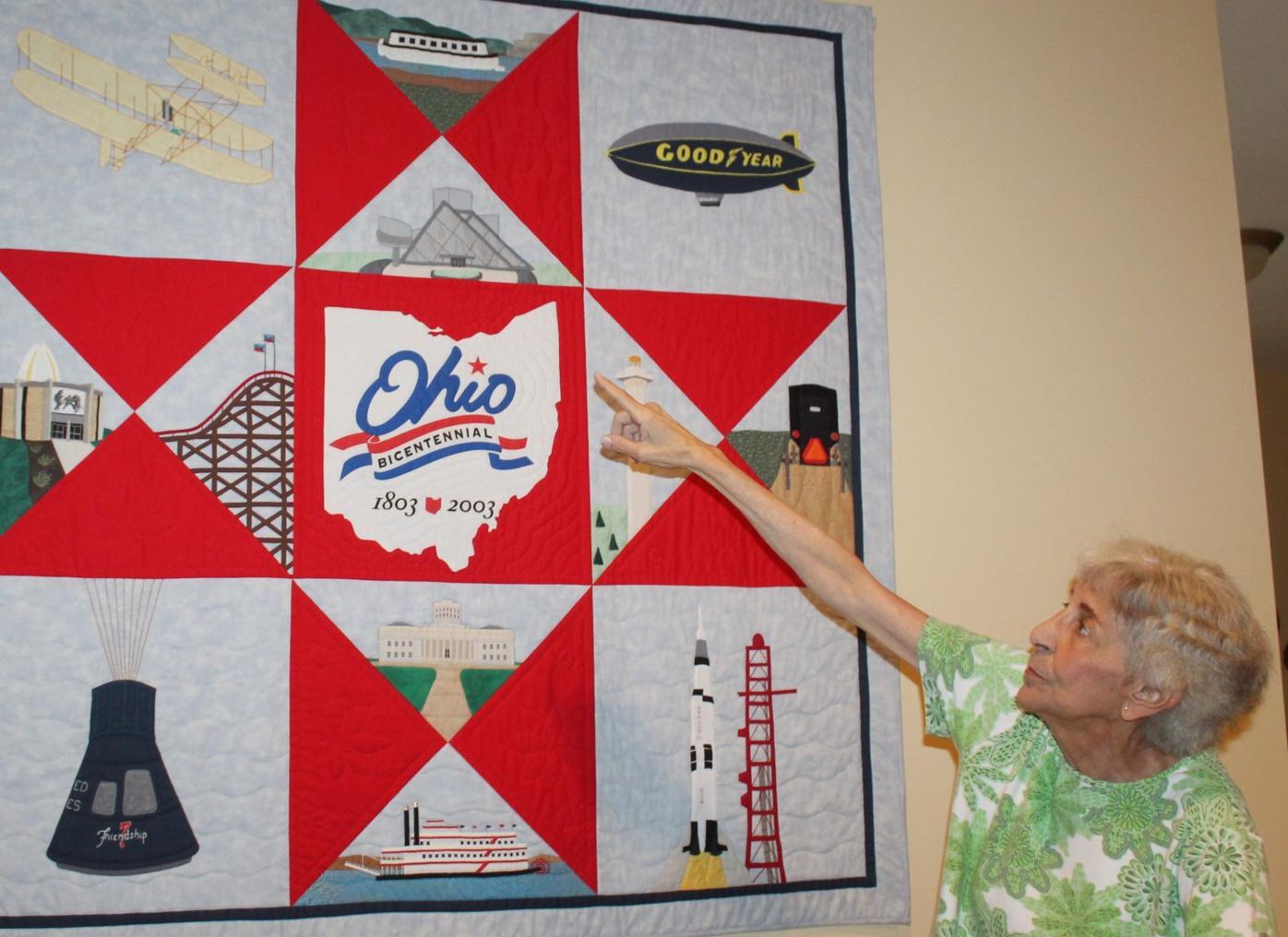 Mamie Ringenbach, a Tellico Village quilter and sewer, shows an Ohio quilt she made.

This Sept. 11 quilt by Tellico Village quilter and sewer Mamie Ringenbach shows a New York City firefighter who was grief-stricken after the World Trade Center collapsed.

Mamie Ringenbach, a Tellico Village quilter and sewer, shows an Ohio quilt she made.

Mamie Ringenbach made a Sept. 11 quilt almost 20 years ago that pays tribute to a grief-stricken firefighter who broke down after the World Trade Center in New York City collapsed following the terrorist attacks.

But she couldn’t hang the quilt.

“It was too sad to look at,” Ringenbach, a quilter and sewer in Tellico Village, said. “I just couldn’t hang it up. I stuck it under the bed.”

Ringenbach found a new home for her quilt shortly before the 20th anniversary of Sept. 11. The handmade, cotton quilt has been sent to New York Fire Department, Engine Company 214, in Brooklyn. The firefighter depicted on the quilt was from that engine company.

The terrorist attacks Sept. 11, 2001, killed nearly 3,000 in New York City, Washington, D.C., and Pennsylvania. Four hijacked airplanes were used in the suicide attacks on the two buildings of the World Trade Center, the Pentagon and in a field in Shanksville, Penn.

Ringenbach, who has been quilting since 1981, made the quilt in Pickering, Ohio. The quilt won a third-place ribbon in the Ohio State Fair in 2002. She and husband, Tom, later retired to Tellico Village.

A neighbor who is a retired firefighter from New York suggested she contact the New York City Fire Museum.

In an early August email, the museum notified Ringenback that the New York Fire Department has been overloaded with Sept. 11 tributes and most have had to be stored. The museum suggested Ringenbach contact FDNY Engine Company 214.

“We would love to accept your quilt, and it would forever be hung up in this firehouse for all to see,” fireman Mike Esposito of Engine Company 214 said in an August email to Ringenbach.

A number on the helmet of the firefighter depicted on the quilt was used to make the connection to that firehouse. Ringenbach had used a photo published in a special report in September 2001 in Newsweek magazine to produce the quilt. She doesn’t know who the firefighter is, but his helmet had the number 214.

“That’s how we managed to find a home for it,” Tom, husband, said.

To make the quilt, Ringenbach projected the photo of the unnamed firefighter on the wall, traced the picture with pencil on paper, cut pieces and traced those on fabric to produce the image of the firefighter.

“I thought someone should get this quilt,” Ringenbach said. “Now my quilt has a home.”

Engine Company 214 has since sent her a picture of five firemen. Two firefighters are holding the quilt in front of a fire truck.

A member of Village Quilters, Ringenbach said making a detailed quilt usually takes at least a few months. The Sept. 11 quilt was all completely made by hand, she said.