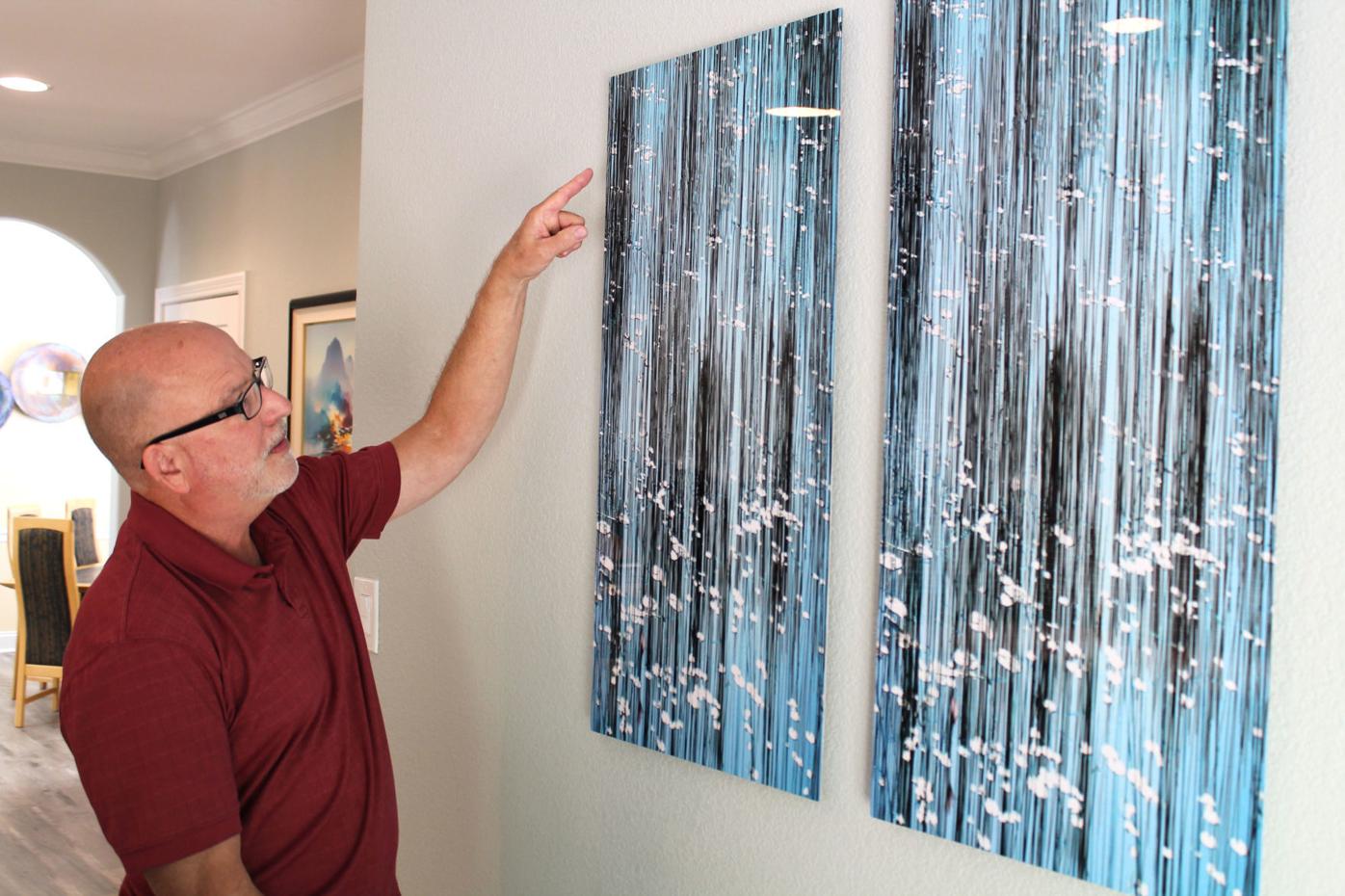 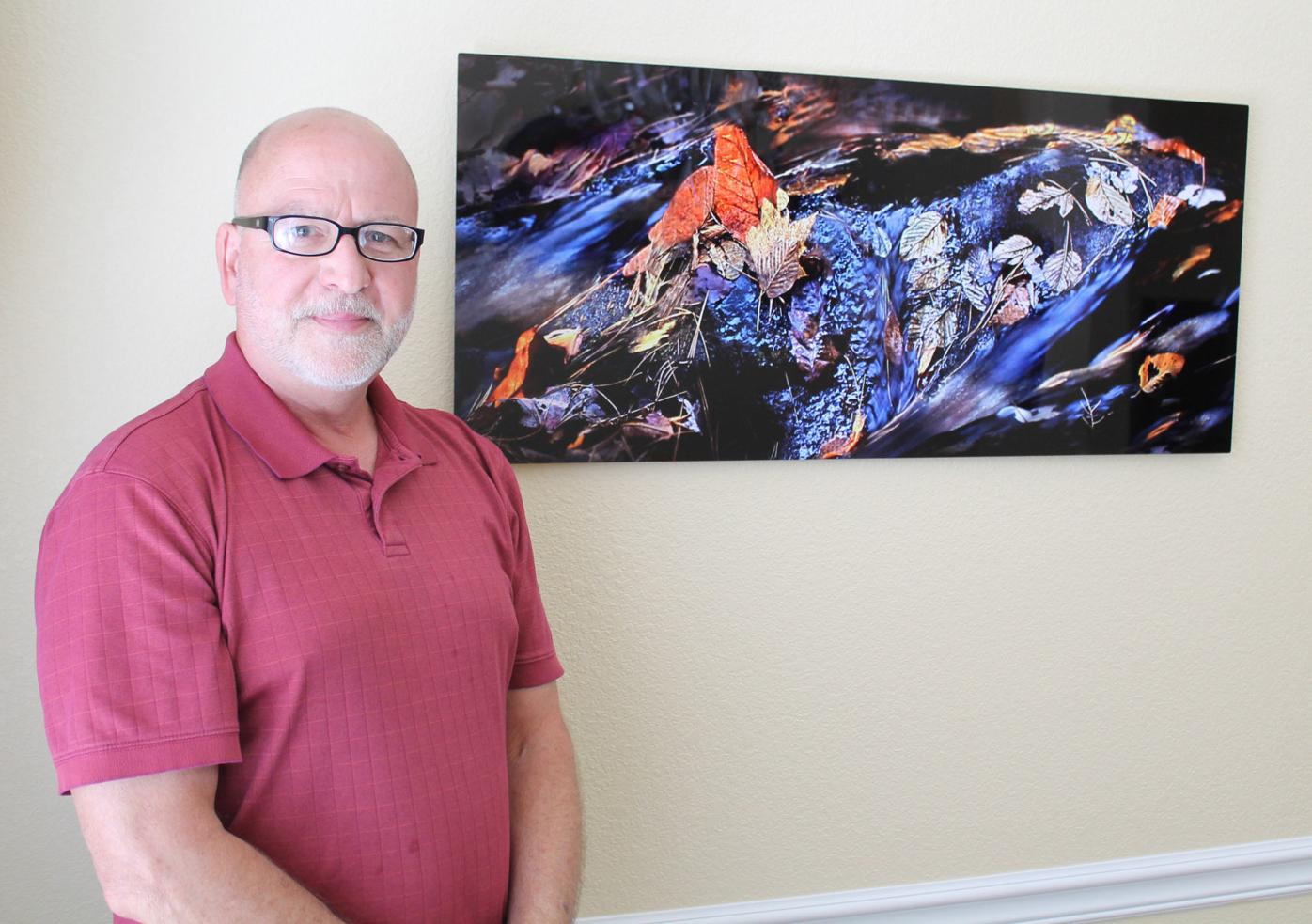 Dennis Sabo stands next to his photo, ‘Autumn Swirls.’

Dennis Sabo stands next to his photo, ‘Autumn Swirls.’

For Tellico Villager Dennis Sabo, photography has been a thread weaving much of his life together.

After minoring in photography in college, Sabo started to build a career in the artform, first as a diving instructor and then through marketing for various resorts and liveaboard boat tours before making the leap to photography as a full-time career.

“It started in the late ‘80s and ‘90s I was an underwater assignment photographer, so I traveled the world with various magazines, be it National Geographic, Conde Nast,” Sabo said. “I would do the pictures … for the magazine and there would be another writer who would write the articles.”

Sabo went on to shoot for newspapers in Florida and eventually made a transition from shooting as a storyteller to shooting as an artist.

“For all the years I shot underwater and traveled the world and dived, I didn’t really have a real appreciation for our natural parks and terrestrial world,” Sabo said. “It was in 2004, a trip to Africa really is where my vocational passion for photography sort of changed and a light bulb went off. We went during the floods of the Okavango and it’s like a Garden of Eden at that time. … It was there that I started really playing with color, light form, texture. I started experimenting with shutter speeds and all that. That’s probably the launch of my fine art career.”

Sabo now travels the country looking for ways to shoot the natural world from a different perspective, calling much of his work “natural world abstracts,” with the goal of evoking emotion from viewers.

His art has been featured in multiple magazines and installed in commercial settings around the country.

“For me, it’s all about color, light and form,” he said. “I think that’s one of the reasons I’ve been so successful is that there’s a lot of great photographers and there’s a lot great pictures that people can take, but what I’m hoping for when I go into the field is that when I finish that my work evokes an emotional response.”

Some of Sabo’s favorite places to shoot have been on the Oregon coast, Colorado and “our backyard” in and around East Tennessee. He has a better appreciation for each of those places because of the chance to see them through his art, he said.

Ruth Fandle is a Sabo fan.

“I have six of his in my home and if I had room I’d have some more,” she said. “Maybe some day I’ll be able to swap out some of what I have.”

Fandle and Sabo have developed a friendship through art. She compares his work to great impressionists.

“To me, I have a hard time not comparing them to many impressionistic artworks,” she said. “A lot of his stuff to me looks so surrealistic that you wouldn’t know it was a photograph.”

The pieces she keeps in her home have become great conversation starters in addition to simply adding decor to various rooms.

“We appreciate Dennis very much, not only as a person, but his artwork too is outstanding,” Fandle said. “It’s nice because I get up and look at it every day. ... They’re something we really appreciate and we really enjoy him. There’s a lot more involved in the work and what he does in comparison to others.”

Sabo dedicates time and effort in each photo, putting in hours of study for a location before setting foot on the ground. The more prepared, the more he can allow himself to focus on what’s happening in the moment, he said.

He may shoot at the same spot for multiple days to get everything just right, going back again and again hoping for the light to fill the scene in just the right way. Some of his best works have been one of hundreds of photos of the same subject, he said.

“So definitely take a lot of pictures,” he added. “Don’t take the one and done because if the one and done isn’t right then when you get home and look at it at 100 percent and say, ‘Oh shoot, it’s not as sharp as I wanted it,’ well, that’s your only picture.”

Bill Tuberville, has enjoyed several one-on-one classes with Sabo. Tuberville has learned not only the technical side, but photography as an artform.

“He really opened my eyes to a lot of things I could do artistically with photography,” Tuberville said. “… He’s a good teacher.”

Sabo has been a “great influence” for Tuberville, who picked up photography as a hobby in retirement.

“I think a lot of people are just looking to take pretty pictures and you can sure learn that from him,” Tuberville. “I guess I was into a little bit more. … I spent a lot of time cultivating my artistic side since I retired and we really connected on that level.”

For Sabo, teaching photography workshops is simply about giving people the tools to express themselves with a photo. He doesn’t expect anyone to shoot the same way he does, only to be knowledgeable enough about how a camera works to do things the way they want.

“I don’t get the time anymore that I would like to teach, but when I do teach it’s passion versus money,” he said. “I’m as busy as I can be doing this, but I love to teach because I love to give back.”

Sabo also continues to learn. He plans to experiment with shooting through different glass textures in the near future and also tries to find different ways of seeing the world.

“If you don’t feel like you can experiment and do your own things then I don’t think your art is going to continue to grow,” he said.