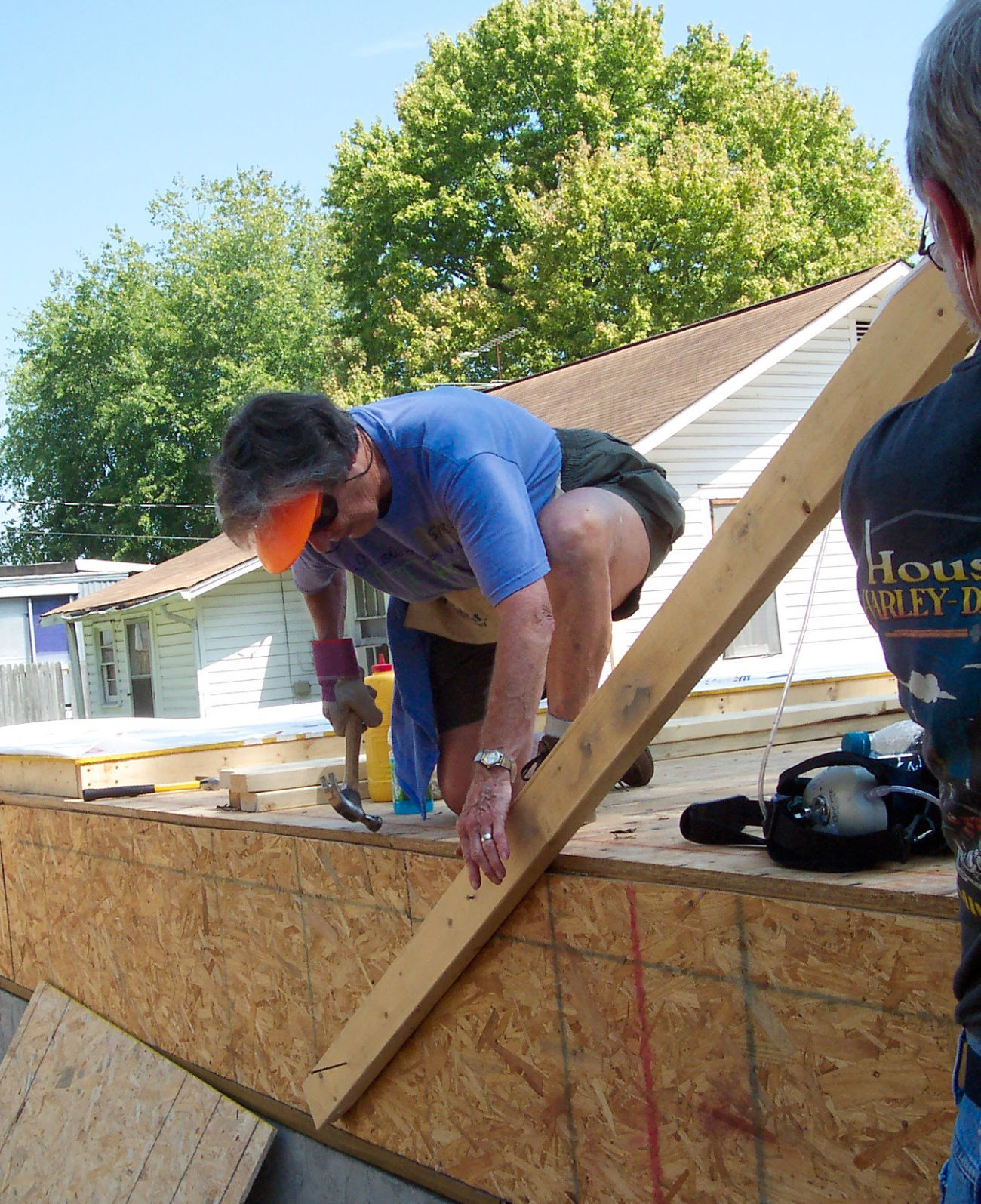 Sarah Reynolds works on a Habitat for Humanity house in Lenoir City. 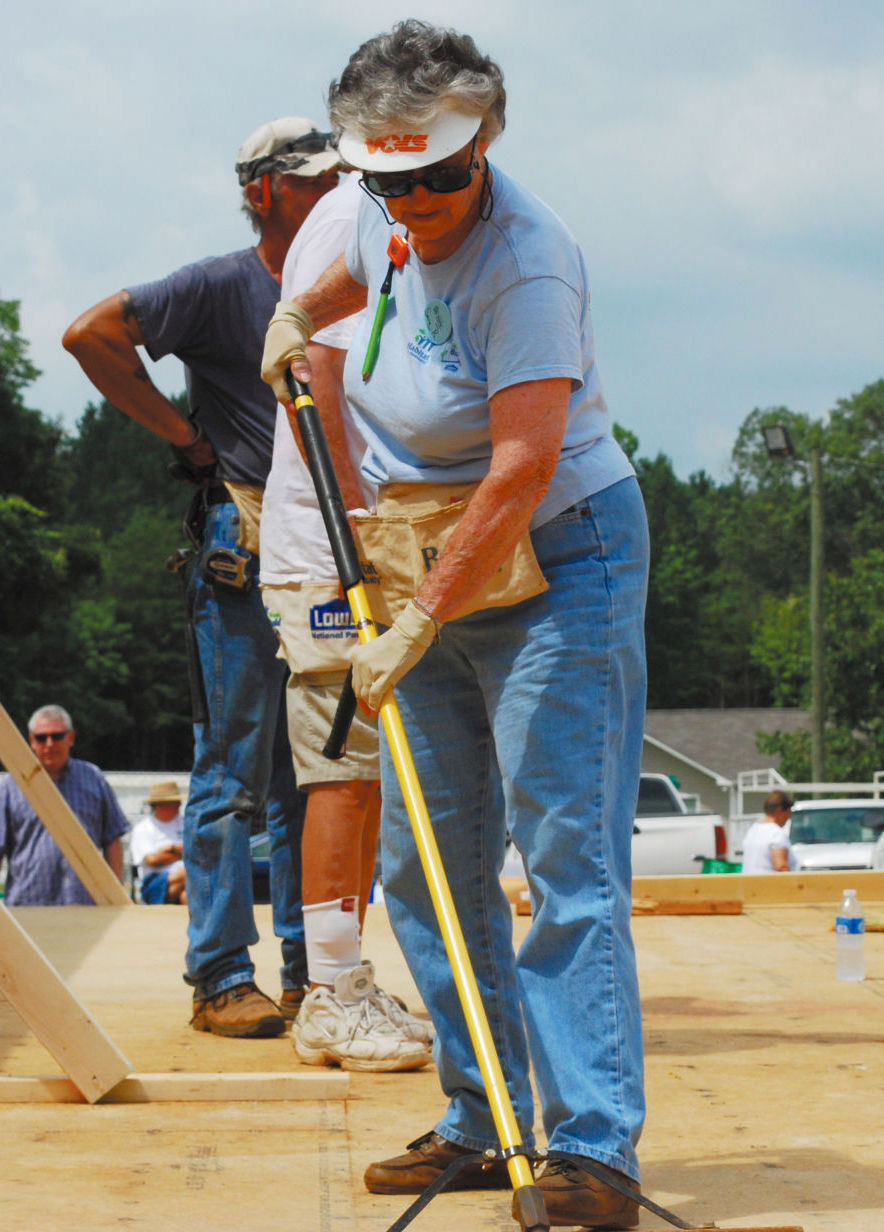 Sarah Reynolds volunteers her time on a Habitat for Humanity house in Lenoir City.

Sarah Reynolds works on a Habitat for Humanity house in Lenoir City.

Sarah Reynolds volunteers her time on a Habitat for Humanity house in Lenoir City.

Loudon County Habitat for Humanity volunteer Sarah Reynolds always had a desire to give back to her community.

Her hard work was recently recognized when Reynolds, 89, won the Legacy of Volunteerism Award during the Tennessee Habitat for Humanity annual conference in Murfreesboro.

Reynolds is the first local Habitat volunteer to win the award.

“Each year Habitat for Humanity Tennessee presents State Impact Awards to recognize individuals and groups that have significantly impacted the lives of residents and communities and made tremendous strides in supporting Habitat for Humanity’s quest to end poverty housing,” Sammie Shanks, local Habitat volunteer coordinator, said in an email correspondence. “Even though we realize Sarah does not seek glory for her many deeds, we felt strongly that Sarah should be recognized and were confident that a review committee would agree that she is deserving of recognition.

“For many years to come the Loudon County Habitat affiliate and Habitat families will benefit from the impact Sarah has made, and she is also setting the stage for her family to continue the involvement with Habitat,” she added.

The award is presented to those who lead by example and whose service over time demonstrates repeated acts of care for Habitat and the community. Reynolds works to set an example for women of all ages to participate in the hands-on building of homes.

Reynolds and her husband, Richard, were part of a small group of people in 1992 who organized the local Habitat affiliate.

“Our dream was to build our own house, to actually do the construction work ourselves,” Reynolds said. “For Christmas one year I bought him a radical arm saw. Well, it had to wait three years while we moved to Florida to work, then came back to Tennessee. We bought property in Loudon County and our five children and their families helped us build the house we now live in. I enjoyed so much working with my family to build our house. About that time we heard about a meeting to start a new Habitat affiliate in Loudon County. With Richard’s background in construction, and our experience working with our children on our own house, we knew we could help these people build their own houses.

“There was no question in our minds that it was what we were meant to do,” she added. “We just felt it was what the Lord wanted us to do and why he had led us to Loudon County.”

Habitat opened a thrift store in 1995 to raise money for construction, and Reynolds was a vital cog in a committee that planned the store operation, selected the site, built the display tables and shelves and solicited donations of used clothing and household items for resale. Two moves followed before a permanent location was found for the store.

Reynolds expanded her role in 1996 and began coaching and mentoring a family as they worked their sweat equity hours to fulfilled requirements for their new Habitat home. Reynolds has since worked to support several families by encouraging, advising, praying with them and — at times — being stern when necessary.

“I love building houses, and I love the families,” she said. “I love seeing their faces when they get their keys and their family Bible. It makes my heart feel so good to know I’ve been able to help them.”

One of those families was Jarred and Erin Rise, who along with their three children, moved into a Habitat home in 2006. Jarred is now part of the Habitat construction staff.

“We were so blessed that Richard and Sarah Reynolds were our sponsor family because they were such loving and caring people,” Jarred said. “They encouraged us along the way but also made sure we got where we were supposed to go step by step. Sarah has made certain to stay in touch with my family ever since. She really loves us and walks the walk.”

Reynolds was instrumental in the Women Build program, which to date has included 160 women and constructed 11 homes. A family took ownership of the latest house in May.

“Sarah is a vital part of our Habitat family,” Tony Gibbons, local Habitat executive director, said in a news release. “We admire her and never cease to be amazed by her spiritual strength and faith. She is tireless and a true role model to anyone who wants to serve their community.”

Reynolds has served in various Habitat roles, including being on the board of directors, soliciting grants and donations for projects, representing the nonprofit at meetings and events and recruiting volunteers.

Her desire to simply help surpasses Habitat. She’s been instrumental in her church, Episcopal Church of the Resurrection, becoming a sponsor for three home builds. She continues to work at the church.

“Sarah is one of the first people to volunteer to take care of her neighbors if ill or if they need food,” the Rev. Amy Moorhous, church pastor, said. “She is first to call and check on someone if they are not doing well.”

In addition, she volunteers with the Compassion Ministries Inc., food pantry and supports the Center of Hope to provide Thanksgiving and Christmas meals, clothing and gifts to rural Appalachian counties. She’s one of the longest tenured singers in the Knoxville Nativity Pageant.

“I love helping people do what they can do to improve their lives,” Reynolds said. “... The Lord has a lot to do with it, bringing Richard and me to Loudon County.”