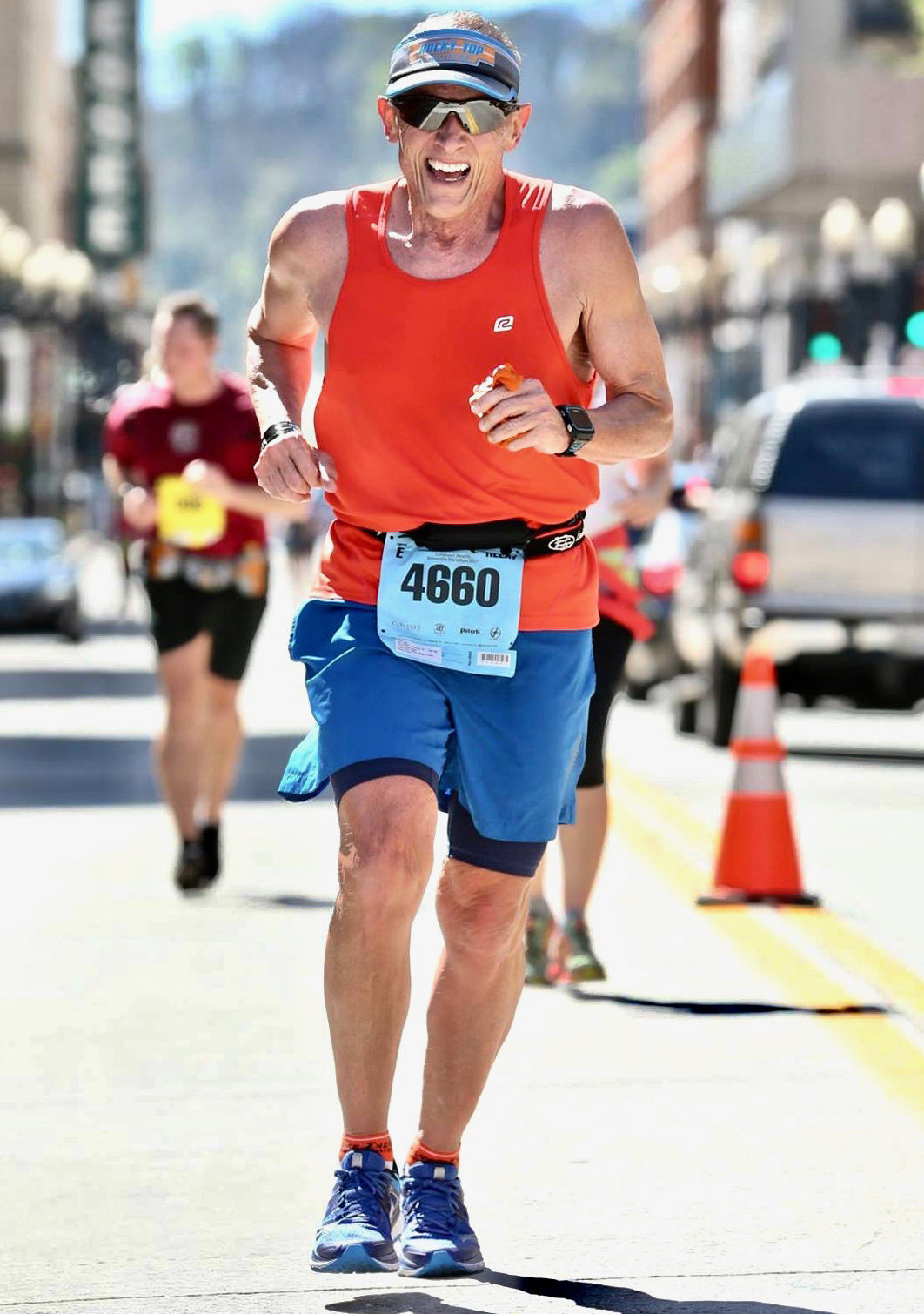 Jim Lilley races to the finish line during a 2017 marathon in Knoxville. Lilley, 69, passed away Oct. 3 and served as chairman on the Tellico Village Recreation Advisory Committee. 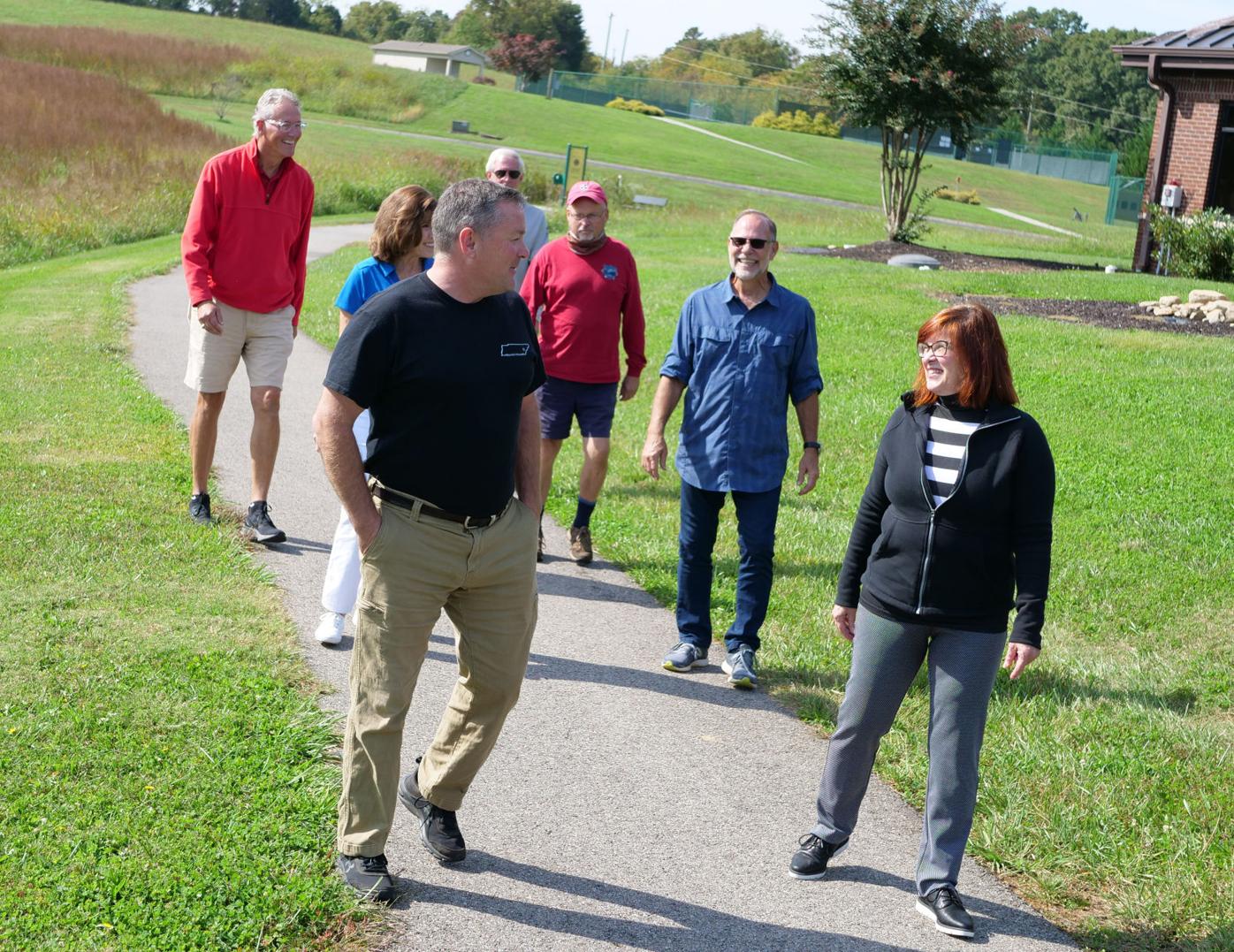 Members of the Tellico Village Recreation Advisory Committee walk along the trail in front of the Wellness Center that will be named in honor of Jim Lilley.

Jim Lilley races to the finish line during a 2017 marathon in Knoxville. Lilley, 69, passed away Oct. 3 and served as chairman on the Tellico Village Recreation Advisory Committee.

Members of the Tellico Village Recreation Advisory Committee walk along the trail in front of the Wellness Center that will be named in honor of Jim Lilley.

Tellico Village recently lost an active and influential member of the community, and now friends and family are finding a way to celebrate and honor the life of Jim Lilley.

Lilley, 69, passed away Oct. 3 following a bicycle accident during a triathlon in Oak Ridge. Lilley served as chairman of the Tellico Village Recreation Advisory Committee and is survived by his wife Dee.

Lilley served on the committee for five years.

“Jim’s become a close friend of mine, and we had a twisted sense of humor and values and visions for the place,” Simon Bradbury, Tellico Village Property Owners Association recreation director, said. “He really loved working with the recreation department and what it’s about it and what we’re trying to do. He was a great leader. He had a tragic accident ... and it was a complete shock to everybody. He was super fit, he swam, he worked out and he used these trails all the time.”

Rick Thompson, RAC member, said Lilley lived life to the fullest and will be missed tremendously by the community.

“He was such a likable person and showed interest in everybody — it didn’t matter where you came from or who you were or what community you lived in,” Thompson said. “He was a person that was genuinely interested in everyone. Serving as the chair for the Recreation Advisory Committee, he just did an outstanding job because he was so enthusiastic and believed in recreation for everyone. That means walking, that might be swimming, that might be pickleball or badminton or whatever it might be, and he modeled that in his personal life.”

Prior to retiring in Tellico Village, Lilley spent several decades as an educator, coach and athletics director.

“He was a primary school teacher, middle school teacher, high school teacher and he’s got kids that are now grown up from those schools that still kept in touch with him because of the impact he’s had on their lives,” Bradbury said. “At one point he nicknamed The White Shadow because he was a white coach that went into a black neighborhood where he was working and he had a girls track team and helped mentor these kids. That’s the kind of guy he was, and he had a lot of energy and vision when he worked here.”

Lilley played an instrumental role in the development of numerous hiking and walking trails throughout the Village and advocated for numerous amenity upgrades.

He also supported the establishment of the Timeless Tellico Foundation, which is a nonprofit organization raises funds for various recreational amenities in the Village through donations and trusts.

“Jim leaves a legacy here, and you would never find an individual as enthusiastic as him,” Walt Cook, RAC member, said. “He supported this community, he and his wife (Dee). He helped teach a lot of people on the recreation committee really what it’s all about. He was a fantastic guy, and he’s done a lot to further this with a vision. He always had a vision for the future, which is very important and what we’re trying to continue as a committee.”

In honor of Lilley, the committee and TTF decided to name the walking trail that surrounds the Wellness Center the Jim Lilley Walking Trail. Bradbury hopes to raise $7,500 for the naming rights through TTF and will allocate the funds toward recreational amenity upgrades.

Donations can be made online at https://www.tellicolife.org/timeless-tellico- foundation. Checks can be mailed to Tellico Timeless Foundation at PO Box 556, Loudon, TN 37774.

“After I soaked in all the shock and everything after this, I thought, ‘What’s a good way to honor this guy?’” Bradbury said. “He really made a huge impact to everybody here, and the first thing that occurred to me was the walking trail. It’s one of our naming rights inventory items from the foundation. We’re going to have a nice slogan because of the things he used to say was, ‘Live a good story.’ It’s going to be something very positive and motivating as people come by. The proceeds will go toward amenities in the Village, so we’re taking a bad situation and turning into good for others. He would have loved this.”