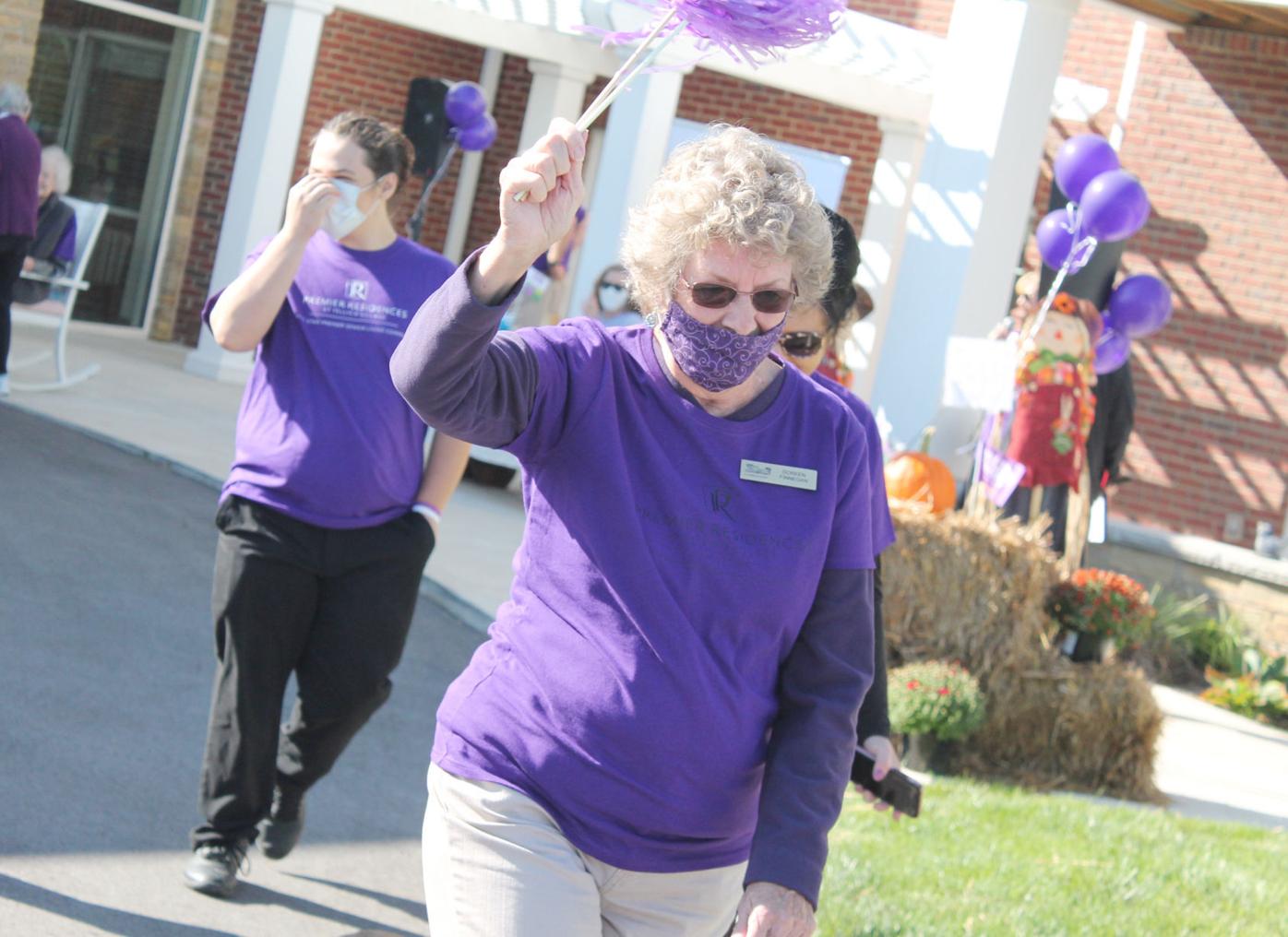 Doreen Finnegan and others start their walk Saturday at Premier Residences at Tellico Village. 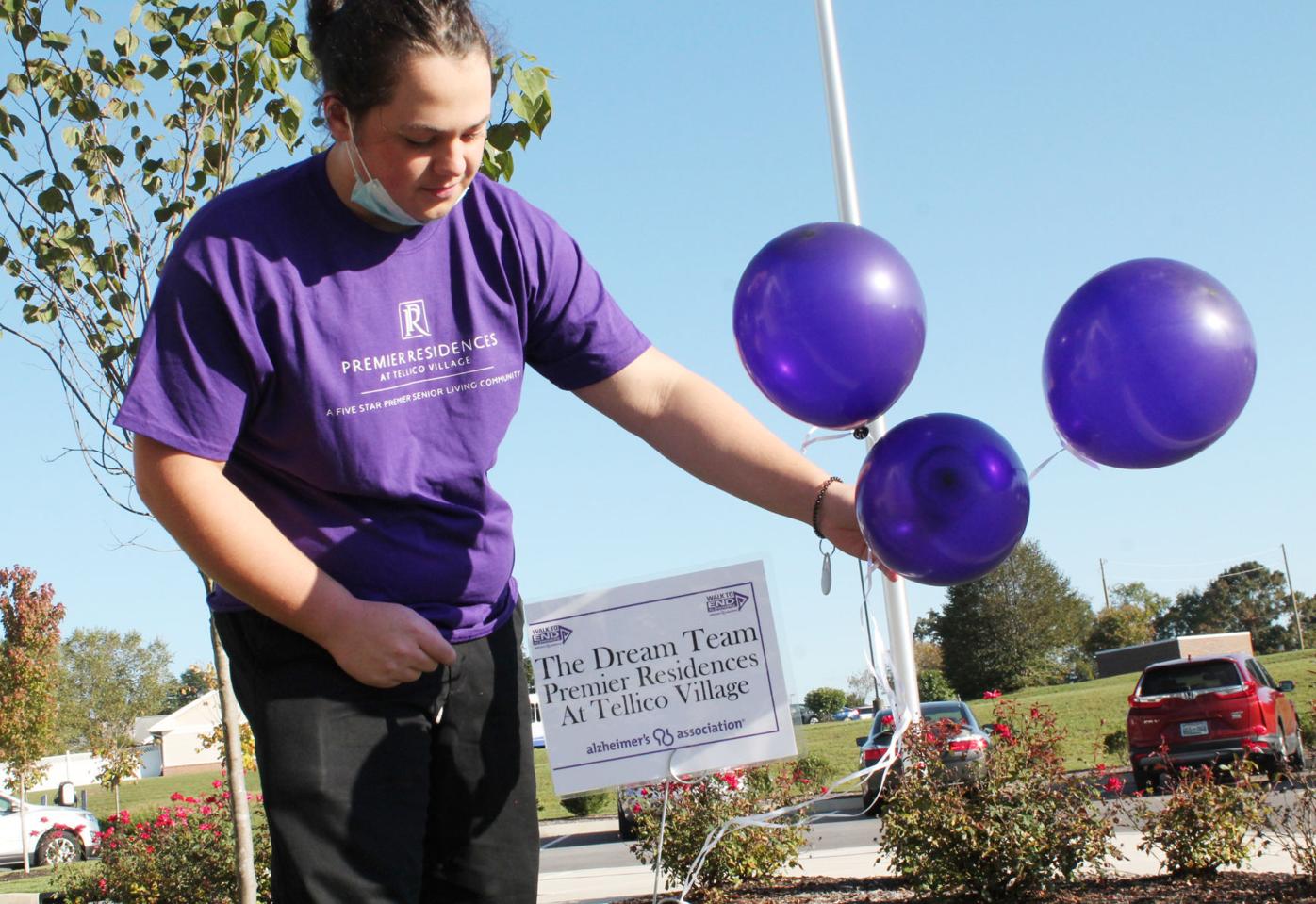 Doreen Finnegan and others start their walk Saturday at Premier Residences at Tellico Village.

Residents and staff from The Neighborhood at Tellico Village and Premier Residences at Tellico Village, some decked in purple, waved pom-poms and proudly walked around the center campus Saturday to raise Alzheimer’s awareness.

As of Saturday morning, the walk helped collect $1,935 from 11 sponsors, some of which set up tables in the front of Premier Residences.

The event was part of a grander nationwide effort through the Alzheimer’s Association Walk to End Alzheimer’s, and marked the first time it was held on the Village campus.

“We joined everywhere else,” Stephanie Willett, The Neighborhood Bridge to Rediscovery memory care program director, said. “Due to COVID, we don’t go out and join anywhere else, but all the other walks — we walked in Maryville at Foothills in previous years.”

About 65 people, including more than 40 residents from both properties, participated in the three walks varying in distance.

“It’s toward the residents’ abilities, because some residents can walk a lot further than others, but we wanted everyone to have a chance to participate,” Jennifer Krueger, Premier Residences assistant executive director, said. “So we didn’t want them to feel like they had to walk three miles or something like that, no matter what their abilities were. We even have one resident who said, ‘I really can’t walk,’ but he’s got one of those scooters and I was like, ‘Get your scooter. Drive it. Do that’.”

A staff member and resident teamed up for each walk, Krueger said. As people walked by the front of The Neighborhood, memory care residents outside in the parking lot waved and cheered them on.

According to the Alzheimer’s Association, more than 5 million Americans are living with the disease. The number could balloon to almost 14 million by 2050. Alzheimer’s is the sixth-leading cause of death in the U.S.

“It’s huge because you’ve got the family members, you have the community and the staff members who contribute,” Willett said of the amount collected. “Alzheimer’s is very dear to me because I’ve had it in my family and I’ve been the director in our memory care for four years and it’s just a very special place in my heart.

Dawn Queener, a Realtor with Walker Realty Group, had a grandmother suffer from the mind-crippling disease.

“Ever since she passed away in 2007, I’ve always been a part of the Alzheimer’s community just because that’s something that’s directly affected my life,” Queener said. “So that’s why I’m here. I just feel passionate about raising money to find a cure because if we could have had a cure for my grandmother, she might still be here. It was a tough thing to go through and watching my papaw take care of her and my mom, it was hard.

“They needed support, and so I think raising money to find a cure, it also helps the caregivers because they’re the ones who are suffering during the process of taking care of somebody,” she added.

“I think in Home Health we’re supporters of just the older population in general, but I think it really kind of became very personal to a lot of our employees in terms of having family members going through the same thing, and I think with that and bringing forth talking to others about that,” Anna DeNino, Quality Home Health memory care coordinator, said. “The company as a whole and the agency as a whole said this is an area that we also need to really probably branch out and really focus more on, or at least bring a better quality of life to them in their home or setting, whatever that might look like.”