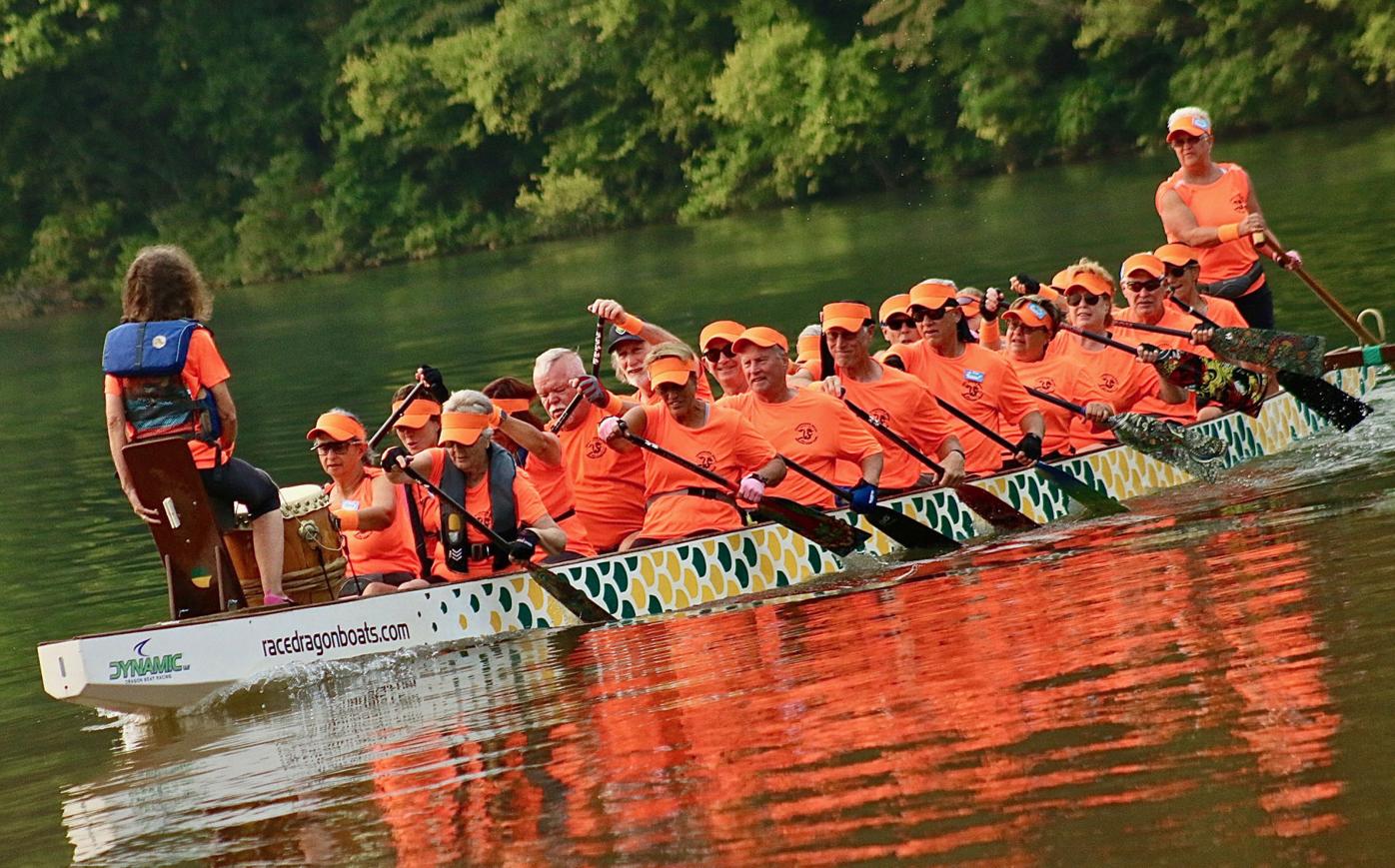 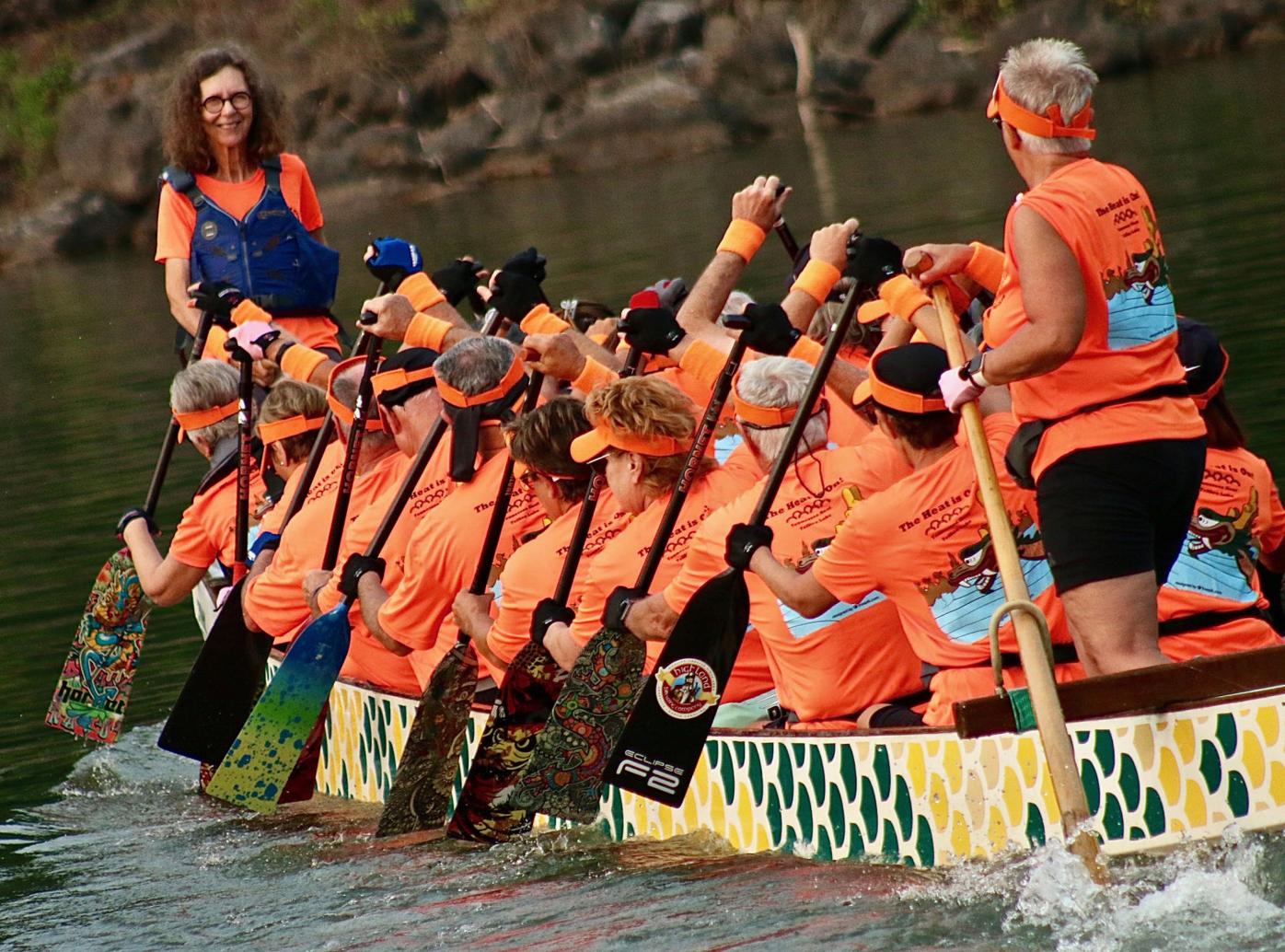 Residents living on Tellico Lake have probably noticed long rowing boats gliding swiftly across the water in the mornings this summer.

Those 22-person boats are part of the Tennessee Heat Dragon Boat Club, which was formed five years ago in the Village and has grown to nearly 50 members, Sue Clontz, club vice president, said.

“I joined in 2017 and our first race was in 2018, and we maybe filled the boat every day to go out and practice,” Clontz said. “Then in 2018, we grew enough that we could race. In 2019, we got even bigger. This year we’re huge and part of that was in Tellico Village there’s a club called New Villagers so for three years I have gone to New Villagers every month recruiting people, and that’s a big reason for why we’ve grown. We’ve got two ladies from Rarity Bay because they’re friends with someone in the Village, so you don’t have to be from Tellico Village to be on the team.”

The Tennessee Heat competes in the A division, while the Tellico Lake Dragonflies compete in the B division.

Both teams were unable to compete last year due to the COVID-19 pandemic but returned to practice in April. The Heat and the Dragonflies have spent the last four months preparing for the Drums on the French Broad Boat Festival, which will begin at 8:30 a.m. Saturday at 2320 Winfield Dunn Parkway in Sevierville.

All active club members have been fully vaccinated in order to participate.

“Last year we didn’t have anything, so me and my wife trained all year at the gym for the upcoming season,” Kevin Kelly, Tennessee Heat boat captain, said. “This year at the beginning of the season, there was a lot of uncertainty because of COVID and whatever so we didn’t have any early races. So really our one big event this year is the upcoming race. We’ve been training for three months now because we didn’t train in May.

“I kind of took a little different approach and wanted to be a little more systematic so every practice we’ve had has been a little bit tougher, a little bit tougher,” he added. “I’ve been waiting for that breaking point, and we haven’t reached it because these people have been amazing on their commitment and ability. I think we’ve got a much stronger team than we had last year.”

Dragon boating is a sport steeped in Chinese tradition that dates back more than 2,500 years. Each boat is led by a drummer that sets the stroke tempo and helps guide rowers through the course.

Each practice lasts an hour and consists of a series of stretching, warm-up strokes and competition simulations.

“We practice on Monday, Wednesday and Saturday mornings, and this year we’re actually entering two boats in the race,” Kelly said. “We do a 300-stroke warm up and then we have drills. We have a hit drill, where we’re just practicing synchronicity and everyone’s paddle hitting the water. We do ladders, which we’ll do 10 strokes together and then the first will do two strokes and everyone else adds on after that. We also do race starts and races and practice that, so it’s a pretty vigorous workout by the end. It’s fun, it’s a good time and it’s amazing because we’ll get respect from the other teams.”

This year will mark the second time the club has competed in the Drums on the French Broad Boat Festival.

Clontz is hoping to draw more fans and support for the event, which will feature live music, food trucks, inflatables and a beer garden.

“It should definitely attract the Villagers,” she said. “We’ve had people come out to the (Knox Area Rescue Ministries Dragon Boat Festival) because it’s at Concord and that’s close but two years ago when we raced up in Sevierville I don’t know if we had any Villagers that ventured that far up there. This year, we’re trying to get people to come out and support us. Like any sporting event, it helps when you have people cheering you on. It’s fun to have other people come cheer us on and have people see what it’s all about.”