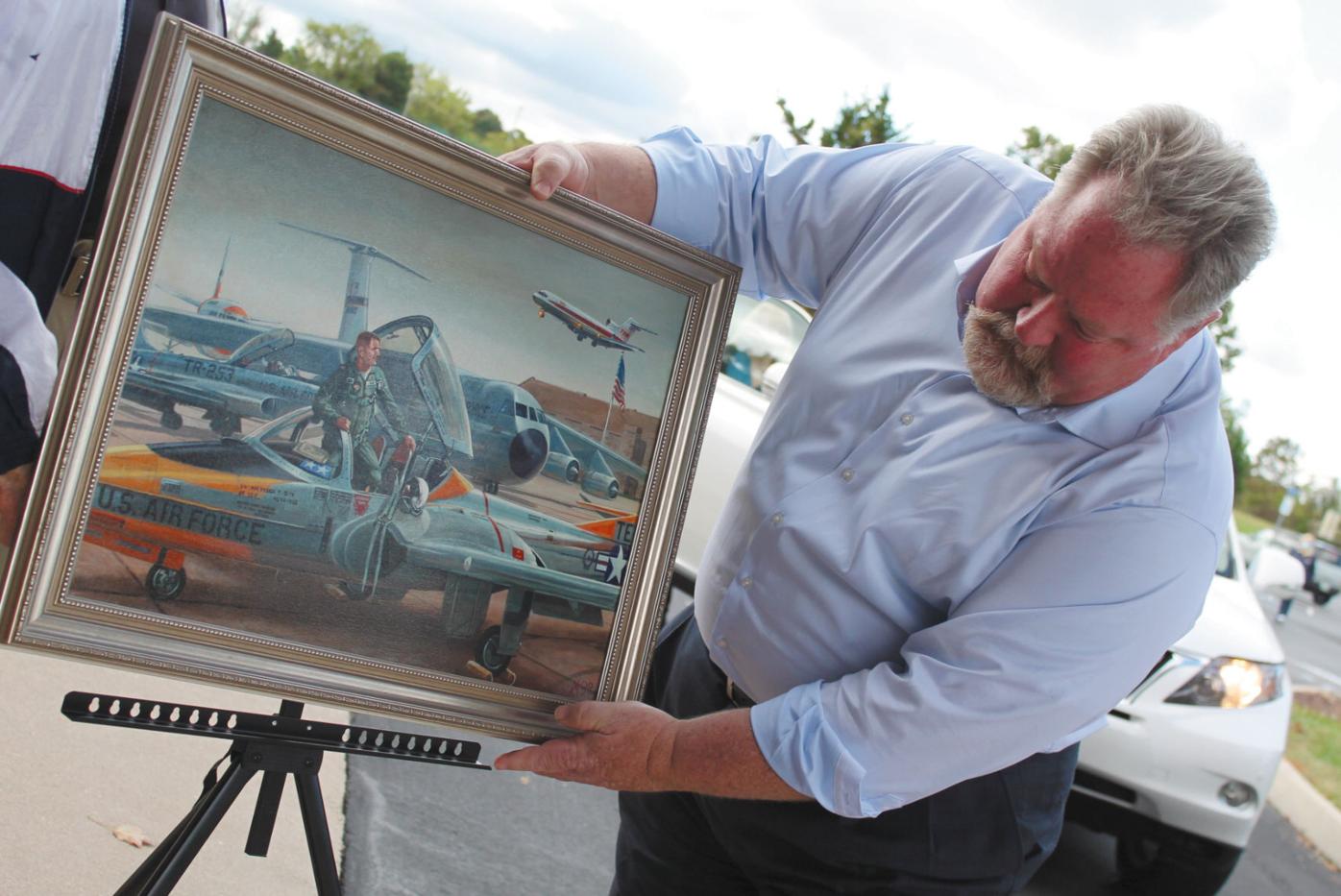 David Carpenter, one of Shirley ‘Sam’ Carpenter’s sons, sets up a painting made by Sam’s son-in-law, Mark Churms. 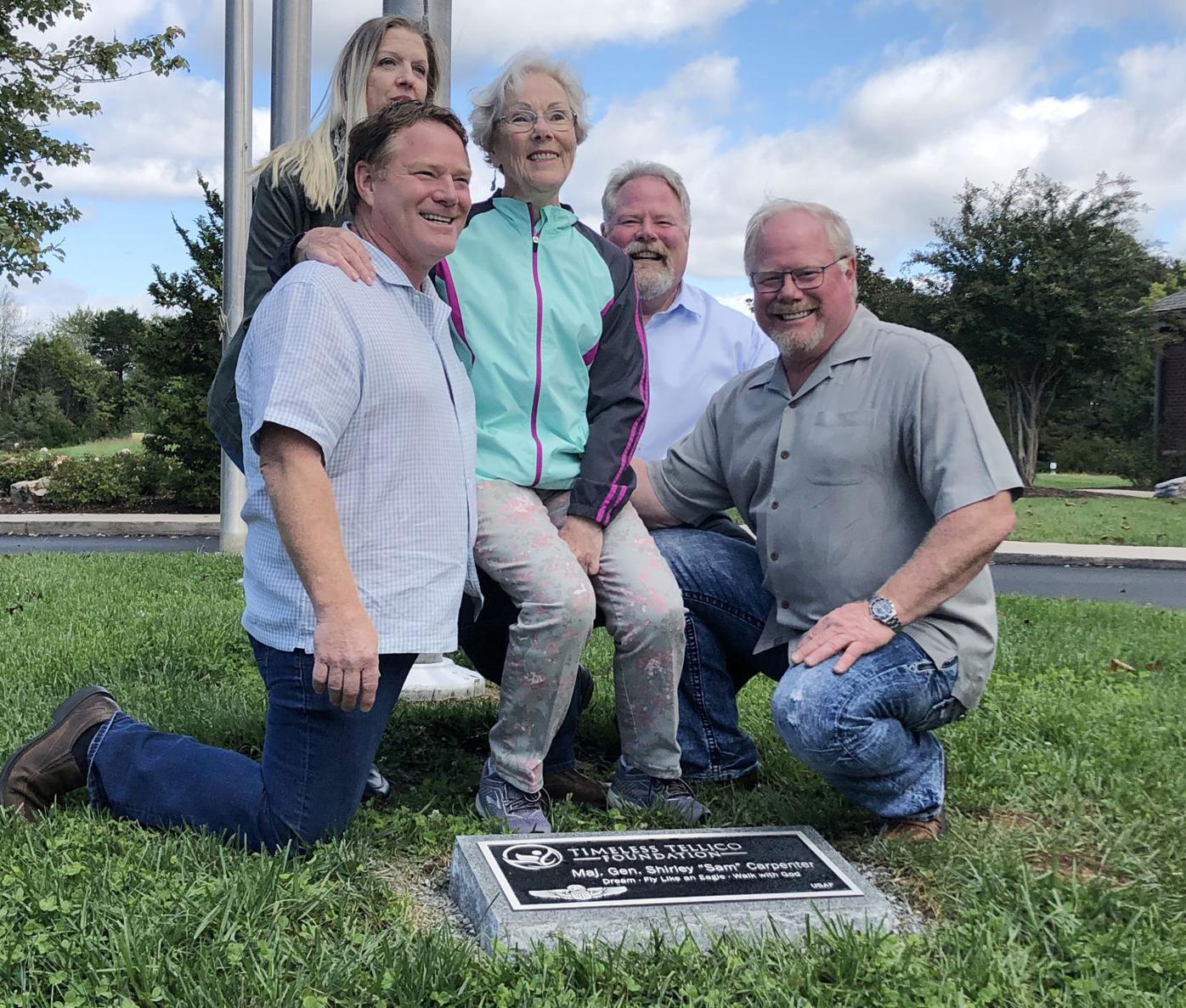 David Carpenter, one of Shirley ‘Sam’ Carpenter’s sons, sets up a painting made by Sam’s son-in-law, Mark Churms.

Friends and family huddled Saturday beside the Wellness Center flag poles to honor a man who served his country with distinction.

The presentation culminated after $9,200 was collected from 60 donors, about one-third of which came from outside the state. The money will go toward TTF projects.

“We didn’t go out advertising to the whole Village,” Bill Butera, TTF vice president, said. “We’d just speak to people who knew Sam, so it wasn’t a project like pickleball where we look for support from the entire Village to fund like most other projects. ... Just to give you an idea of how well this gentleman was thought of, when he got his full military honors at Arlington Cemetery, the Air Force did a fly-over with a C-17. Now that’s a big deal because they have to shut down Reagan Airport to do that. They shut down all military and civilian traffic in the D.C. area, and you can imagine how touchy that all is. That’s a pretty deal to be doing a fly-over like that.”

Carpenter completed Squadron Officer’s School, Air Command and Staff College and the prestigious National War College. His final assignments were based at the Pentagon, where he served as deputy of the chief of the USAF Reserves and director of the Reserve Forces Policy Board. Carpenter logged 8,700 flight hours and 83 combat missions in Vietnam and had several military decorations.

His professional career included “Loyal and Dedicated Service” and “Flying With Distinction” for Trans World Airlines from 1968-97, where he achieved the level of captain. He was a professional consultant with Volga Dnepr and the Department of Defense, which included brokering transportation for the U.S. Air Force.

Carpenter’s plaque reads, “Dream. Fly Like an Eagle. Walk with God,” and aviator wings are placed in the lower left side.

“We ask donors come up with plaque sayings that bespeak the honoree, and also consider messages that convey kind of a life message to people who will come by and look at that plaque,” Butera said. “So Ruthie (Carpenter, Sam’s wife) and her family and friends, they put a lot of work into this process. ... But the wording on the plaque certainly bespeaks Sam and there is a life message for all who will ever walk past that flag pole there. ... And no more appropriate location exists for Sam’s plaque than under the flag of the country he loved and so ably served.”

In preparation for the ceremony, Butera said he spoke with people Carpenter worked with over the years. Three officers attributed Carpenter’s mentorship to their career success in the military.

“The most important thing to any pilot, of course, are their wings,” Butera said. “In preparing these remarks, I spoke with several officers who worked with Sam throughout his career, and these people knew him best, and they knew him over many, many years, and I want to share some of their comments. I quote one retired colonel verbatim: ‘You can put Sam on the highest pedestal and you would not be embellishing anything.’ Other comments, ‘Respected and admired as a professional aviator and leader.’ ‘Wonderful sense of humor.’ ‘A severe no-nonsense professional Air Force officer and airline pilot.’ ‘Good sense of humor that could lessen the tension and improve the situation.’ ‘Pragmatic to the core’.”

Sam’s family was present for the ceremony, including wife, Ruthie Carpenter; sons, David, Scott and Dale Carpenter; and daughter, Kristi Churms and son-in-law, Mark Churms, who displayed a painting of Sam that represented the planes he flew over the years.

“It’s an honor,” David Carpenter said. “We feel very blessed, but we’ve always enjoyed this community. Mom and dad moved to Tellico Village in 2001, so 20 years, and this was their forever home. He retired after 38 years in the military and that’s one of the things we enjoyed most is mom has a wonderful community wrapped around her, a wonderful church family, wonderful friends, and dad and mom loved coming to the rec center. I lived here for a couple of years when I moved to Tennessee.”

“He truly felt blessed,” Dale Carpenter added. “Everybody in the Village, each person touched him in different way, but he got to know the people on the personal level, more than just neighbors.”

“... One day we decided all of us would tell our backgrounds, so we went around one person by one person. Came to Sam (and) he said, ‘Well, I had a relatively successful career in the Air Force’,” Sewell said. “What that brings me to the thing that I gravitated to him so quickly was not his success, but his humbleness.”

“I think mentors are incredibly important, especially to people our age,” Sewell said. “I don’t care how old you are, it’s great to have a mentor, and I look at Sam as a mentor because I admire him so much for his love for his family, his love for his country, his gentleness and his humbleness. I’m just really honored to be able to have known Sam, his family and it’s just something I really admire the man until the day I die.”