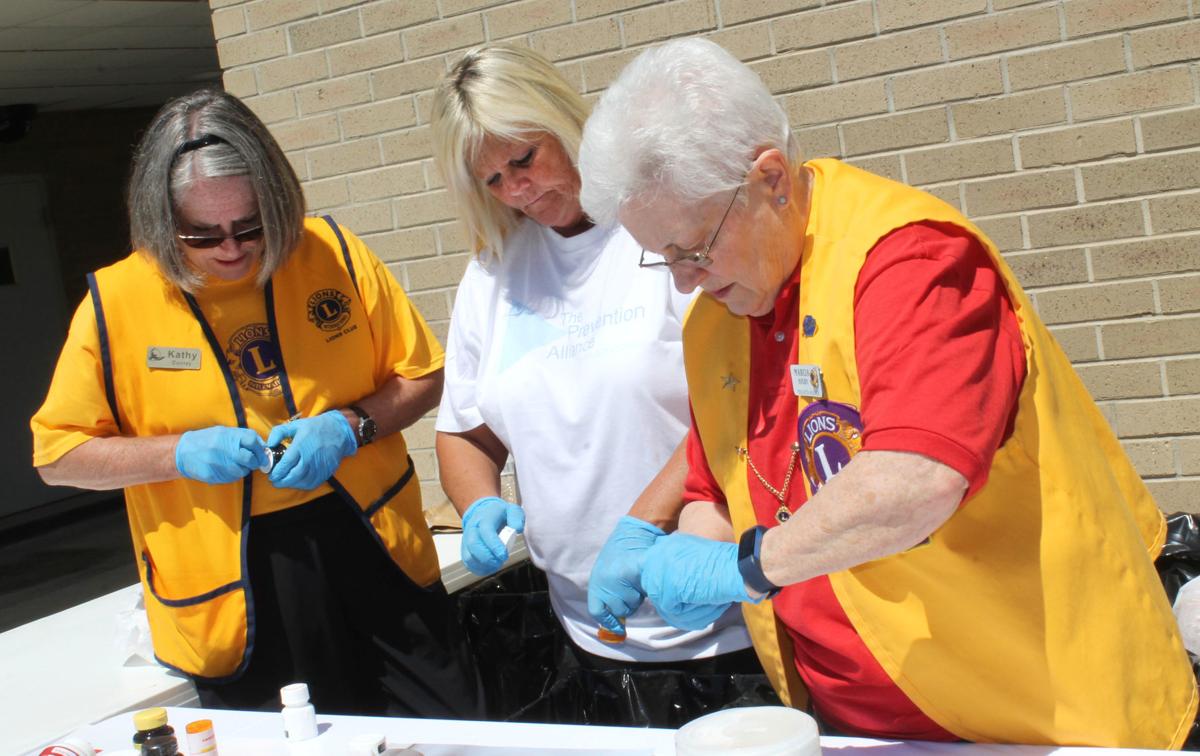 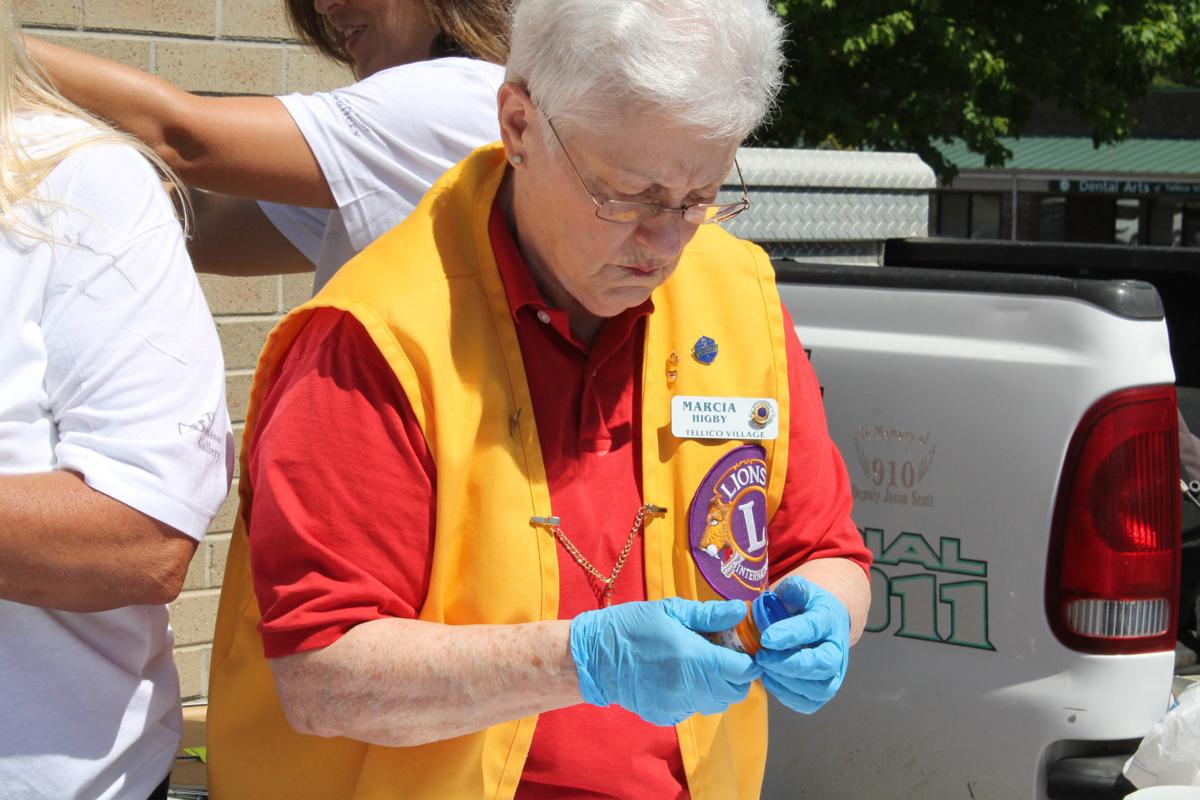 Marcia Higby opens a pill bottle Saturday during a Drug Take Back Day at the Welcome Center. 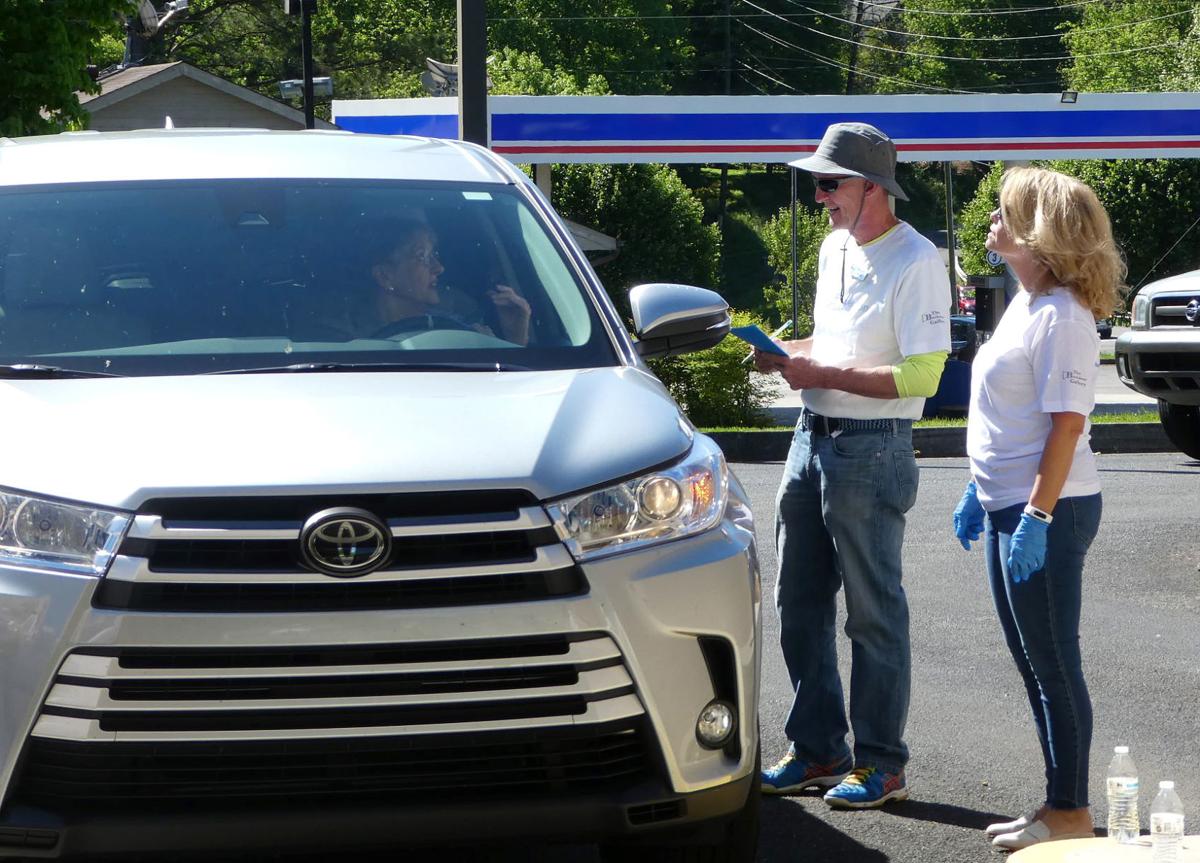 Warren Hunt, left, and Trudy Hughes conduct a survey with a resident who participated in a Drug Take Back Day event Saturday in Tellico Village.

Marcia Higby opens a pill bottle Saturday during a Drug Take Back Day at the Welcome Center.

Warren Hunt, left, and Trudy Hughes conduct a survey with a resident who participated in a Drug Take Back Day event Saturday in Tellico Village.

Volunteers were busy Saturday afternoon at the Welcome Center as hundreds of vehicles passed by to drop off unused, unwanted and expired medications.

The event was part of National Prescription Drug Take Back Day.

“This community has not ever accomplished a Drug Take Back Day,” Trudy Hughes, East Tennessee Foundation vice president for regional advancement, said. “Our local Tellico Community Foundation wanted to support that effort here in Tellico Village. So we connected with Align9, which is a multi-county drug recovery program. They connected us in turn with the (Prevention Alliance of Loudon County). It all came together. Lots of volunteers working together made this happen.”

The idea for the local Take Back Day came from the Tellico Community Foundation, which is under the East Tennessee Foundation umbrella. Warren Hunt, who conducts focus groups for TCF, led the charge.

“We’ve worked with the Prevention Alliance of Loudon County on another project, and we talked about what would be a good way to try to make our community here, particularly Tellico Village, more aware of the opioid crisis,” Hunt said. “It seems like something that doesn’t really touch us here, so we thought something like this would really be a service to the community but also bring home a little more the challenges in our area.”

“We focus in on four things — the opioid crisis, support for seniors, early childhood literacy and community enrichment across both counties,” he said. “So we’ve already made grants in those four categories, and we’ll continue to work through those four categories probably for the next couple of years and then reevaluate and look at should we continue doing this, what’s our impact and what’s our feedback? ... This event alone is both opioid and seniors.”

The purpose of Take Back Day is to limit access to prescription drugs, which are mostly likely to be taken by family members, Vicki Cowell, Prevention Alliance program coordinator, said.

“The relatives don’t even realize they’re gone because they don’t even use the medications,” Cowell said. “That creates an addiction problem and just leads to more problems with opioid-related deaths.”

TCF provided a $1,000 grant to the Prevention Alliance to put together the program.

Representatives from TCF, ETF, the Tellico Village Lions Club, Align9 and the Prevention Alliance sorted donated medications and deposited them in specialized containers. A deputy with the Loudon County Sheriff’s Office was also on site.

Used prescription pill bottles will be cleaned and have labels removed by the Lions Club and sent to an organization that repurposes the containers for Third World countries.

Saturday’s event was an enormous success for all agencies because 274 vehicles passed through, dropping off an estimated 200 pounds of drugs for collection. Beyel called the turnout “overwhelming,” having expected about 50 vehicles to show up.

“The DEA agents who were here were saying they’ve never seen so much stuff in one location at one time,” Hunt said. “They do this nationwide. So it’s been really overwhelming.”

Those who stopped by were asked to take part in a survey as they left, and the response from the community was also positive.

“The gratitude that they’re giving us on the way out, they’re so appreciative because many of them don’t know what to do with them,” Beyel said. “So we’ve told them if you don’t have this day there’s a station at the police department in Loudon city.”

Plans are to make the Take Back Day an annual event in the county.

Other good practices include locking medications in a safe place and counting them to be aware if any are missing.

For those unable to drop off medications Saturday, Loudon Police Department offers a safe way to dispose of prescription drugs all year.

A drop box is located in the front entrance of the police station, 100 Cedar St., Loudon, and is accessible 24 hours a day, seven days a week.

“I would say that it’s been extremely successful,” James “Bear” Webb, Loudon police chief, said. “When we first put it in we were doing some promotions to let folks know we had it. … We made some fliers to distribute at the pharmacies here in Loudon. … Whenever we first initiated it, it was being filled up quite frequently. Now it’s just steady because folks are aware of it.”

Webb agrees that leaving prescription drugs unmonitored and improperly stored can be a problem.

“You don’t want any type of prescription medicine to get into the wrong hands,” he said. “Whether its by accident or inadvertently or someone who makes a choice to break the law. We don’t want drugs prescribed for one person to get into the hands of someone else.

“Every little bit adds up,” he added. “Hopefully, we all work together to have a safer community is our ultimate goal.”