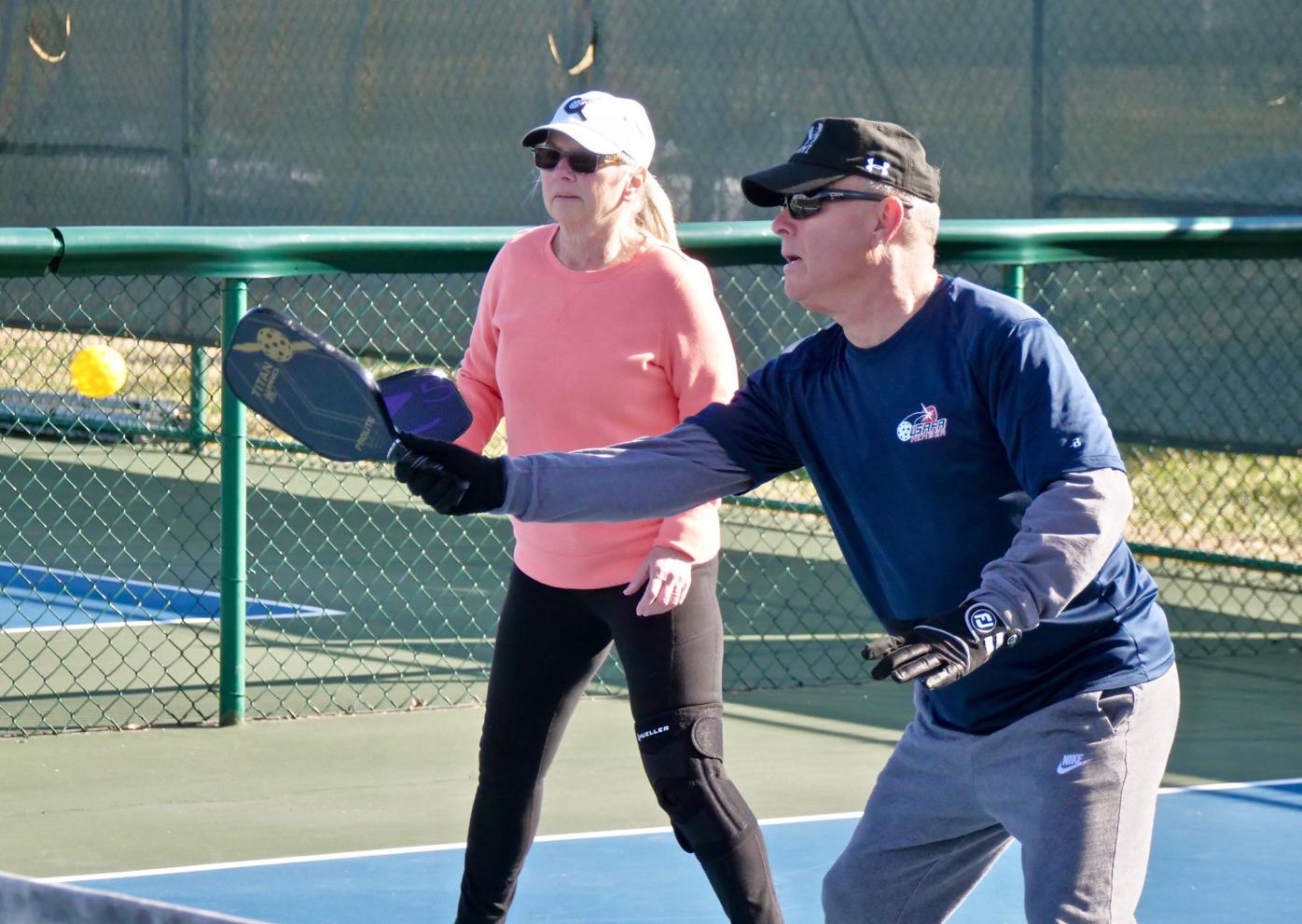 Mike and Debbie Thornton play at the net during a pickleball match at the Wellness Center. 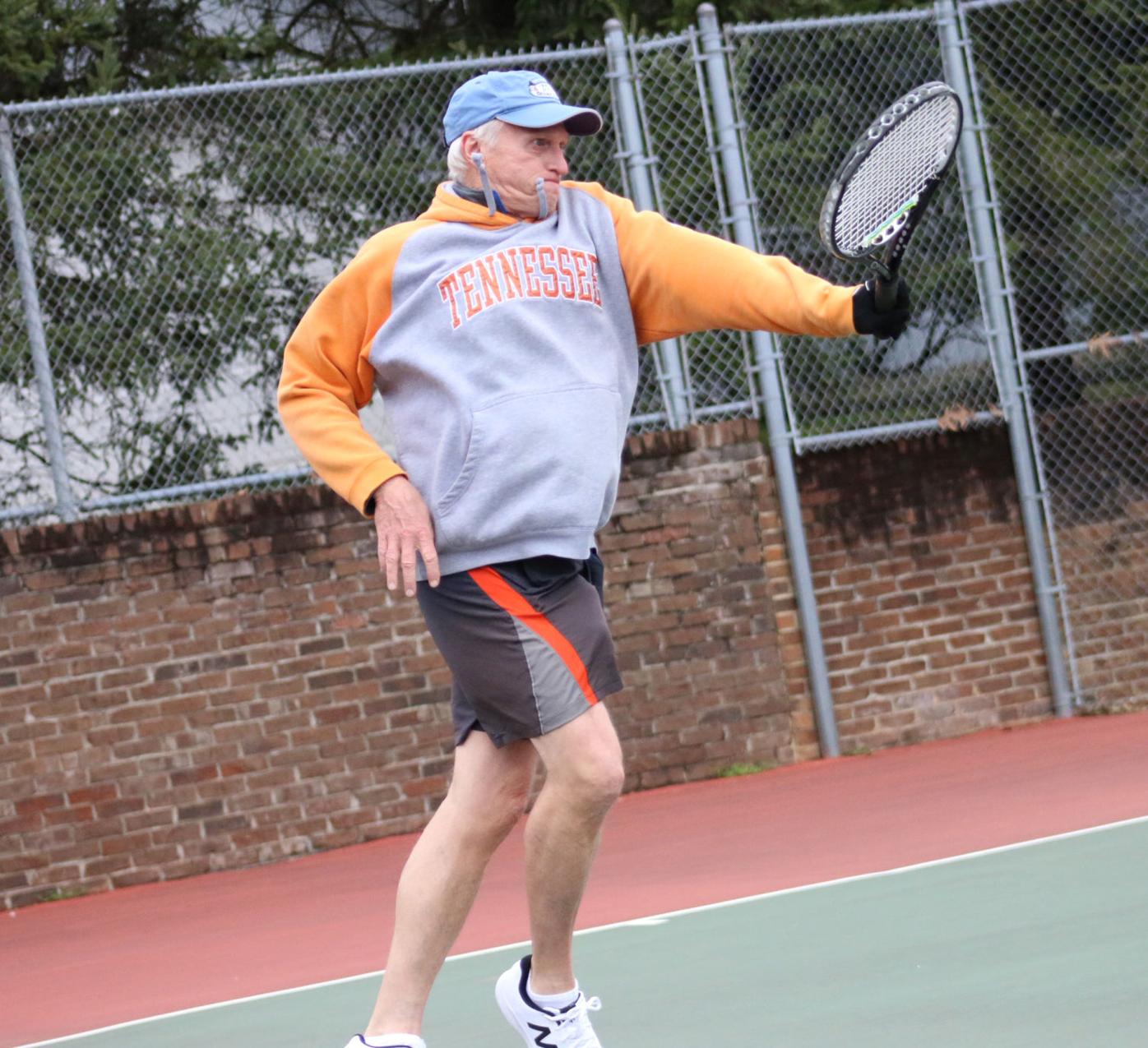 Thom Lewis hits a forehand during a tennis match at Chota Recreation Center.

Mike and Debbie Thornton play at the net during a pickleball match at the Wellness Center.

Thom Lewis hits a forehand during a tennis match at Chota Recreation Center.

Despite cold temperatures and wet, wintery weather, members of the Tellico Village Pickleball Club and Tellico Village Tennis Club are hitting the courts to prepare for the spring season.

Since the onset of the COVID-19 pandemic in March, both clubs have slowly tried to reach a level of normality.

“It started out strange as it was for everybody because almost everything down there got closed for a while, and pickleball was the same,” Jim Hyne, TVPC president, said. “We kind of agreed with the (Tellico Village Property Owners Association) that you’ve got to keep people away from each other, and so we locked the gates and nobody was allowed to play. I don’t remember the exact dates of when that occurred, but again, working with the Wellness Center and the POA, they slowly allowed us to start opening up. We kept cautioning all of our members to take care of themselves and to take care of fellow players. Slowly but surely, we’ve transitioned back to what I would call almost a full schedule.”

After forming in August 2019, the tennis club was looking forward to a full year of organized play and activities before the pandemic forced numerous cancellations.

“This was really going to the be the first full-blown, organized-type year and everything with all these activities planned from March and going through October,” Brent Greider, TVTC treasurer, said. “We probably would’ve added a couple of more functions later on and then, come March, COVID happened and the (Chota) Rec Center shut down everything for a while. The Chota Rec Center and the Wellness Center were physically closed and, of course, that meant no tennis, no pickleball, no nothing. They eventually slowly opened, but they had all these regulations and rules.”

As the pandemic continues, hundreds of Villagers have turned to pickleball and tennis as a way to get outside and exercise.

With a recent decline in COVID-19 cases locally and new vaccinations, Hyne believes more people will be willing to play.

“I’ve been surprised because when they started to open things back up, people were a little bit hesitant just like you would expect,” Hyne said. “I think slowly, people have begun to feel more and more comfortable. One of the things that I think is a little bit of an advantage is playing outside versus indoors. Most of the style of play is conducive to remaining socially distant, and so I think people became more comfortable with it as time went on. We’re kind of keeping our fingers crossed because some of the latest numbers of COVID have been positive, but I wouldn’t say we’ve turned a corner.”

The tennis club offers private play for members, but restrictions in place limit the time slots and amount of courts used.

Doubles play has been popular because it allows members to play with friends while maintaining a safe distance.

“I think they determined with tennis that not many people play singles, so it’s all doubles,” Greider said. “Even with doubles, you’re a good 10 or 12 feet away from your partner. Sometimes you come close to each other but through the whole pandemic I have not heard of anybody that got sick from playing tennis. The way it stands right now is you can still play in private groups, but they’ve dropped all open play, which hurt the men’s open and the Rusty Racquets program. The beauty of those programs is they both had certain dates, certain times and you don’t have to sign up for anything.”

The clubs are taking new members and are tentatively planning to hold more events, such as the pickleball club’s annual member-member and member-guest shootout tournaments.

“We’re a little bit handcuffed with COVID and not really knowing where we stand,” Hyne said. “If this were a normal year and we weren’t facing a pandemic, we would be planning a couple of tournaments. It would be open just to our own players, and then we would have another tournament that would be open to people in the surrounding community and Knoxville and so on. Right now while we would like to do something like that, we don’t want to put anybody at risk and have to be careful. Most of our concentration as a board of directors has been continuing to protect our players but opening up as much as we can and getting 2021 off to a good start.”