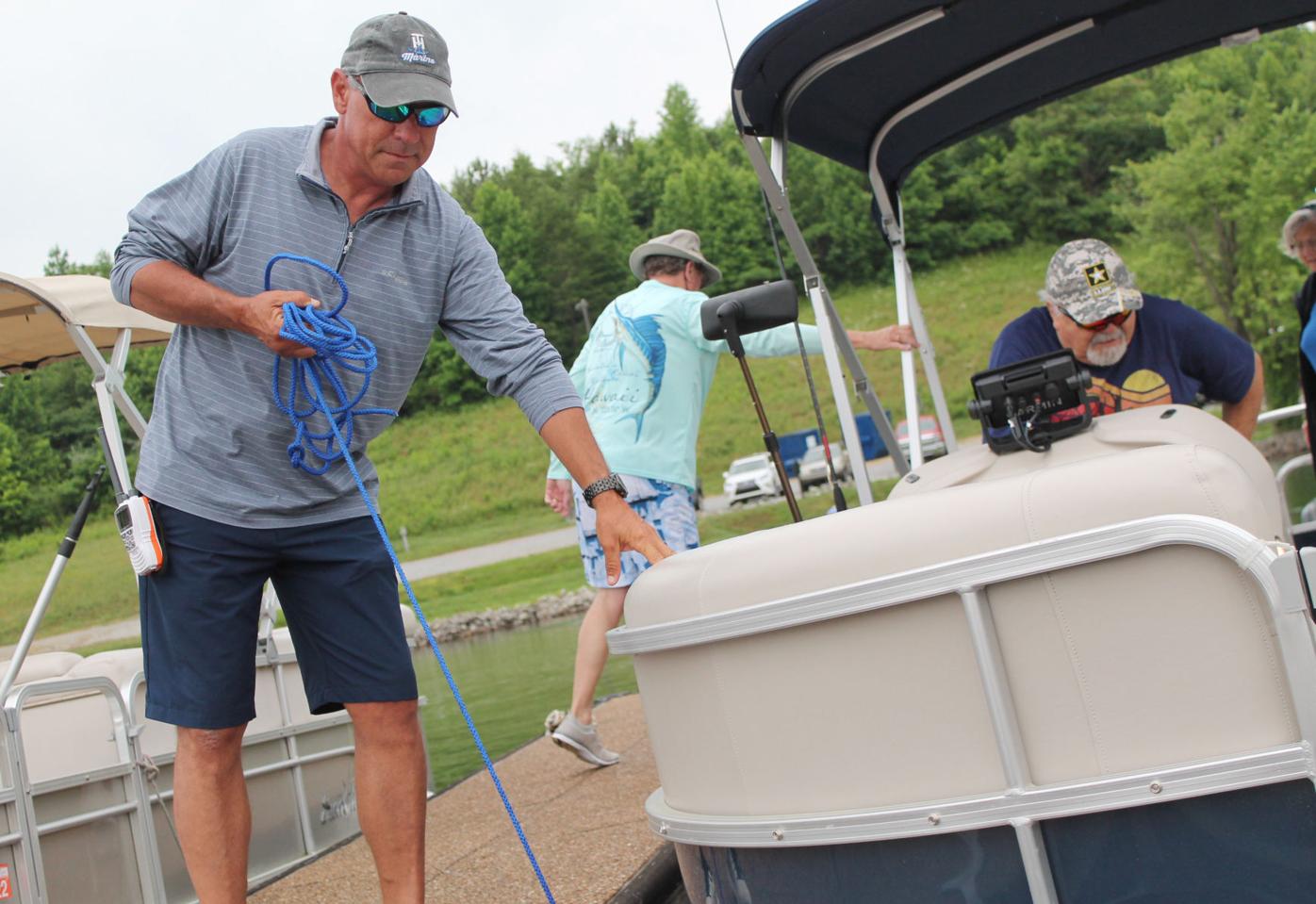 Tim Jackson, from left, and Larry Harlan help tie up a boat driven by Cliff Claggett on Sunday at the WindRiver marina. 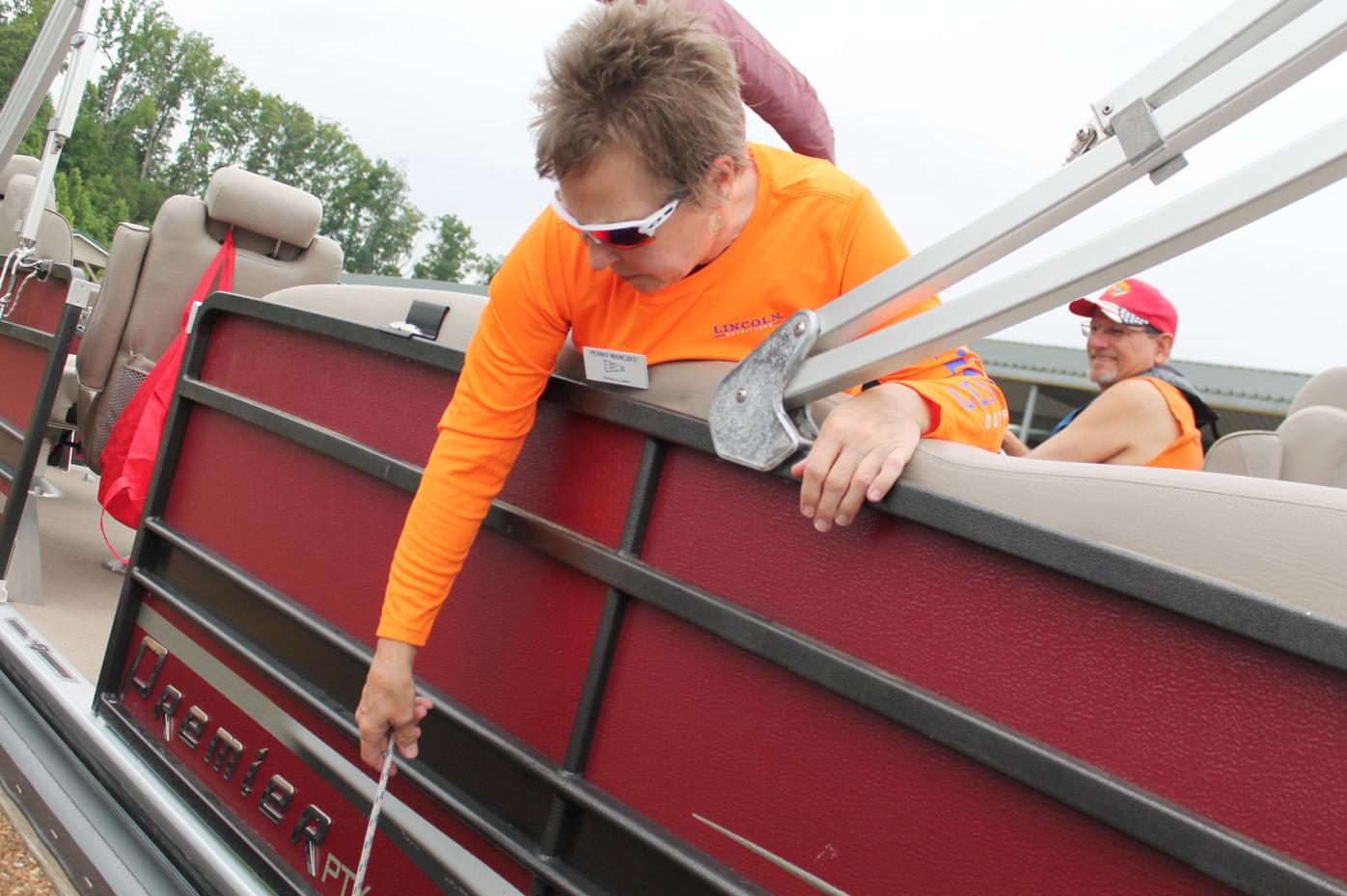 Tim Jackson, from left, and Larry Harlan help tie up a boat driven by Cliff Claggett on Sunday at the WindRiver marina.

Although rain was forecast for much of Sunday, that didn’t stop area boaters from supporting veterans during the seventh annual BoatRides4Vets.

This year’s effort, sponsored by Veterans of Foreign Wars Post 12135, marked a return following cancellation due to COVID-19 concerns in 2020. Boaters welcomed any veteran who came for a ride 9 a.m.-4 p.m.

Jim Jorgensen, post commander and event founder, was excited to see the annual event back on schedule.

“There’s a lot of support for it,” he said. “A lot of support for it, guests wanting to come to it. We’ve had more call-ins this year than ever before. I have never had a problem getting volunteer boats, so they’ve come out in droves. We’ve had a few cancel here the last day. They’re looking at the weather and getting a little afraid of that, but it’s going to be what it’s going to be.”

Jorgensen estimated about 20 “boots on the dock” volunteers were present along with more than 30 boats.

A final number of visitors could not be determined by The Connection presstime.

“We’ve had great cooperation in resuming it when we put out the call for boats,” Ed Frandle, event dock captain, said. “We’ve had response from about 40 different owners that they would try to participate this year, which is more boats than I’ve had any year in the past. The last time we did it we had a little over 100 people and I put out 29 boats that day.”

While Sunday was a way to thank veterans, Jorgensen said the event was also an opportunity to recognize military families.

“A lot of people who have not been in the military don’t realize it, you know this, what a sacrifice it is for the family moving every two to three years, sometimes being at home alone for a year as a spouse is deployed,” Jorgensen said. “When you’re in the military, if you have a spouse and children, you’re all in it together, you really are. It’s a calling almost.”

The day is as special for volunteers as visitors, he said.

He recalled one U.S. Air Force veteran who brought her 9-year-old son in 2019. The boy initially expressed hesitation to get out on the water, but that changed four hours later when he returned to the marina.

“He leaps onto the dock and goes running down the dock back here,” Jorgensen said. “I asked the mom what happened. She said, ‘Well, my son had never been on a lake before, never been on a boat before,’ and she said, ‘This is going to be one those things he’ll always remember his entire life.’ It was really a turning point for him. She said, ‘We even had him out on the tube out on the lake at 35 miles an hour.’ Every year we get something like that, and that makes it all worthwhile.”

Ron Bridges of Clinton volunteered his boat for the day in hopes of being around fellow veterans. Bridges served in the U.S. Army 1984-96, and he’s now president of the Tennessee chapter of the Farmer Veteran Coalition.

“First off today is the anniversary of D-Day, June 6, and some people sort of honor that,” Bridges said. “The biggest thing is a lot of veterans — not all of them —but a lot of veterans reach a point especially after COVID they stay at home too long. They turn inside themselves, so coming out here gets the chance to pull them back out of things and gets them involved in nature. And most importantly, camaraderie with fellow veterans.

“Some of the Vietnam veterans really don’t have a good feel for how much the community knows what they went through,” he added. “They came back and nobody welcomed them home. By the way, if you ever see a Vietnam veteran, that’s what you say to them — ‘Welcome home’.”

In honor of the 77th anniversary of D-Day, an optional participatory reenactment was held.

Sunday was also a first for Tellico Village resident Alan Kendrick, who served 1985-2020 in the U.S. Air Force.

“I appreciate every day the fact that people stop and think about serving our vets,” Kendrick said. “In fact, I’ve had a lot of people over the years walk up to me going out of their way since 9/11 to walk up to us and say, ‘Thank you for your service’ and saw me in uniform. They weren’t thanking me, they were thanking the uniform.”