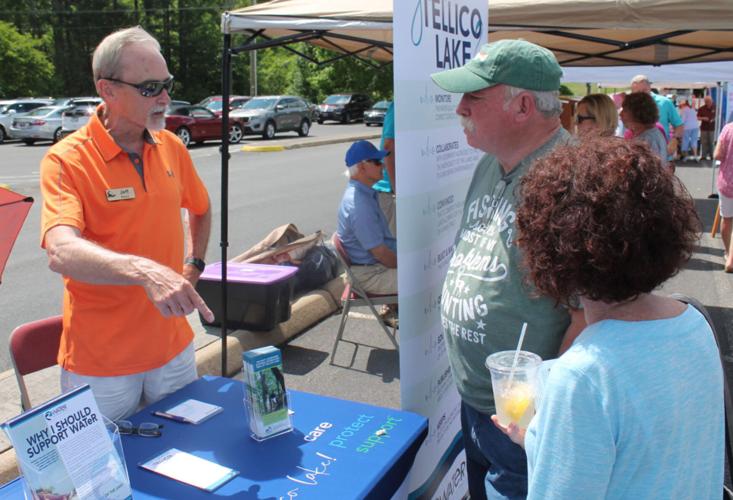 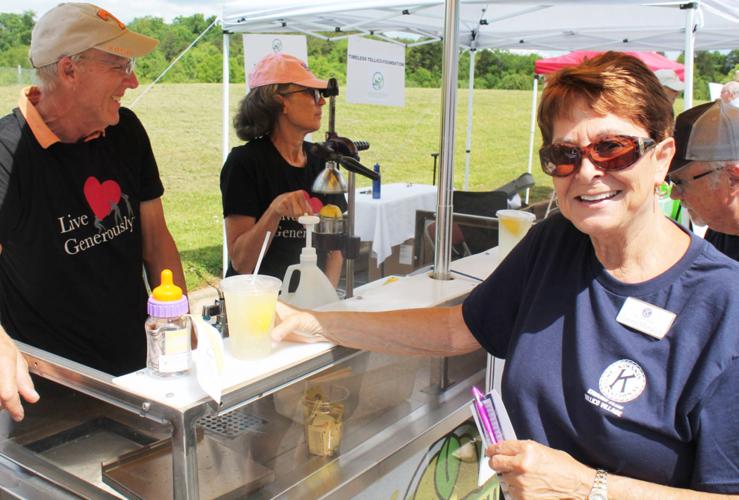 Lemonade made at the table for Christ Our Savior Lutheran Church was popular with attendees at Community Day. From left, Dennis and Linda Burmeister squeezed fresh lemons to serve a cup of lemonade to Ginnie Murdoch. 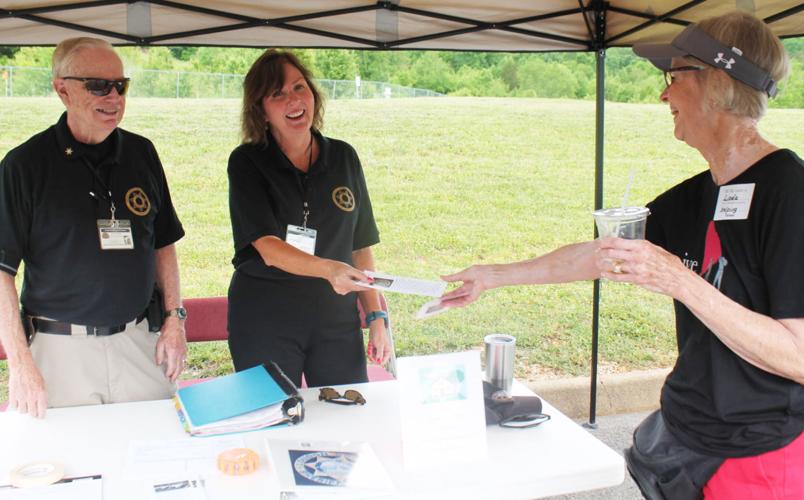 Lemonade made at the table for Christ Our Savior Lutheran Church was popular with attendees at Community Day. From left, Dennis and Linda Burmeister squeezed fresh lemons to serve a cup of lemonade to Ginnie Murdoch.

Friday was a great day to get outside and learn more about the many service organizations operating in and around Tellico Village.

Community Day was sponsored by the Tellico Village Property Owners Association to introduce residents to organizations and clubs they might want to become involved with or join.

Randy Heiden, founder of Tellico Working Together, which helps focus the resources of civic groups, churches and clubs on community issues, said the pandemic depleted the resources of many of these organizations.

Dozens of organizations, from the Tellico Village Woodworkers Club to Kiwanis Club to the North American Bluebird Society, set up tables with tents in the back lot of the Community Church. People began strolling around the event shortly before the 11 a.m. announced starting time.

Linda Anderson stopped by the Citizens Observer Patrol of Loudon County table to learn more about the group that works with the Loudon County Sheriff’s Office.

Jerry Schwartz, a captain in the organization, and Christine Trepal, a volunteer, explained that the group patrols roadways and neighborhoods, checking on homes and watching for trouble.

Anderson was interested in learning more about the Citizens Police Academy conducted by LCSO. Many members of COP have completed the academy.

Trepal said she is currently one of only a few women in COP, but she said there used to be many more women in the group. There are about 150 members, a few of which are married couples. She said new members are always needed and hoped the event would attract more participants.

“We ask that they can commit to two three-hour shifts per month,” she said.

Schwarz, a former military law enforcement officer, said he is always on the lookout for retired or former officers. He said many participants have backgrounds in law enforcement, but it is not a requirement.

By noon, foot traffic was starting to pick up. Even better was that the skies were blue and there wasn’t a chance of rain, Lisa McCray, TVPOA communications director, said.

“I haven’t had an event yet this year where it hasn’t rained,” she said.

One of the most popular tables was the fresh lemonade stand promoting Christ Our Savior Lutheran Church.

“That lemonade is the best,” UT Agricultural Extension Agent John Goddard said. He took time from the 4-H table he was working to sample the freshly squeezed drink.

The free lemonade was made by Dennis and Linda Burmeister from boxes of fresh lemons stacked behind their table. Linda sliced and squeezed the lemons into a cup before handing the cup to Dennis for a vigorous shaking by hand.

The Burmeisters said the lemonade was a great draw to bring people to their table to learn more about the activities of the church.

People were stopping by the Tellico Village Woodworkers Club table to look at some of the finely crafted pieces on display. A charcuterie board with inlaid epoxy was attracting a lot of attention.

Woodworkers members have worked on many volunteer projects, including the cabinets at Our PLACE, the adult day center recently opened to help sufferers of Alzheimer’s and dementia.

The Watershed Association of Tellico Reservoir is always looking for people to get involved in activities cleaning up the lake, testing water and advocating for the environment.

WATeR membership committee chair Jeff Rauch is also a member of the Tellico Village Fishing Club and Tellico Boaters Assistance Response Team. He took the opportunity to recruit for all three organizations, while also providing fishing advice to Ken Garden.

Garden and Ellen Rubin recently moved to Tellico Village from Florida. Rubin was interested in learning more about The Public Library at Tellico Village, while Garden was focused on bass fishing. He said he was learning about a lot of the organizations while asking about local fishing conditions.

He said he is interested in attending the T-BART orientation class suggested by Rauch. The class is held three times a year.

“I can’t wait to get out on the water,” Garden said.

Bill Hartman, with the North American Bluebird Society, was getting a lot of questions about all kinds of birds. The society is dedicated to preserving North America’s three bluebird species.

Hartman said he hears from new residents who move in to find a bird box in their yard that they don’t know what to do with. He said his organization can provide advice on how to service the nest and attract bluebirds.

The General Federation of Women’s Clubs was handing out popcorn. Cathy Maxwell said the popcorn was a good way to get women into a conversation about how they can get involved with the organization.

First Baptist Church in Tellico Village was recruiting new members and looking for volunteers. Choir member Chet Hensley was recruiting for the choir. He said joining the choir at the church was one of the best decisions he ever made, even after some of his friends and family told him he couldn’t sing.

Hensley heard Mark Dye say he liked to sing and immediately began trying to get him to join the FBC choir. Dye thanked him for the offer but said he would probably continue to attend the Catholic church nearest his home.

Dye said the event was a great opportunity to learn more about the community he and his wife had been living in for two years. He said he was looking for organizations in which to invest time.

“I retire in one week and I want to give back,” he said.

Dye said he was impressed with the hospitality since moving to East Tennessee.

“Southern hospitality is real, even if a lot of the people in Tellico Village are not from the South,” he said.

He said he has told his friends about the community and when they visit, spend time on the lake and have a dinner at the Yacht Club they realize he’s telling the truth.

“The next thing they want to do is start looking at property,” Dye said.