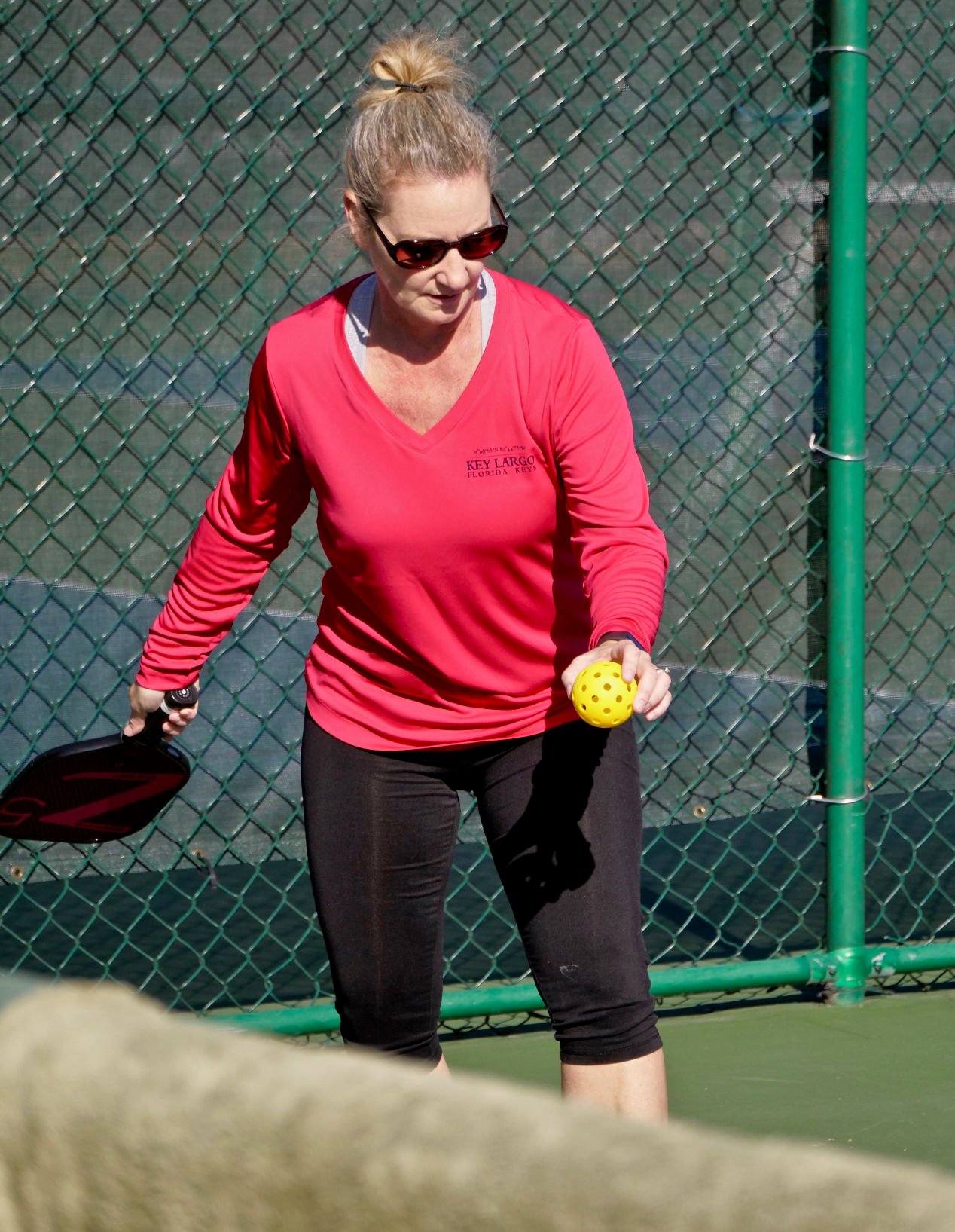 Carol Weber prepares for a serve during an exhibition pickleball match at the Wellness Center. 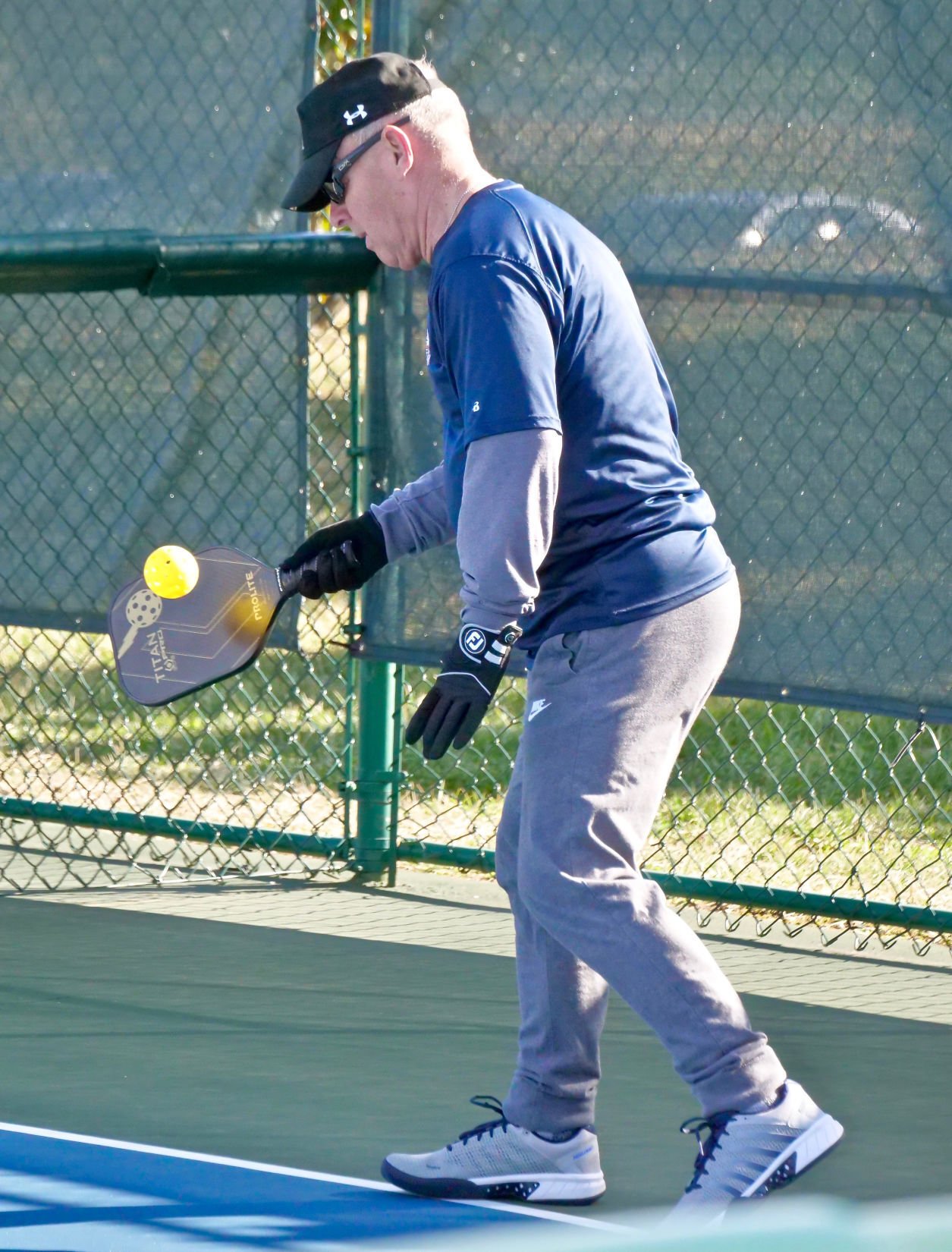 Mike Thornton returns a serve during a pickleball match at the Wellness Center.

Carol Weber prepares for a serve during an exhibition pickleball match at the Wellness Center.

Mike Thornton returns a serve during a pickleball match at the Wellness Center.

With warmer temperatures rolling in and spring officially underway, hundreds of members of the Tellico Village Pickleball Club are hitting the courts in hopes of achieving a sense of normalcy.

“In fact we’ve had a separate group that I call my scheduling committee put together our summer schedule, and our prime times for pickleball will be early and late,” Jim Hyne, TVPC president, said. “Starting as early as 6 a.m. and going up to noon, and then the middle part of the day, especially when we get to late June, July and August, play tends to taper off. In the evenings, people start coming back out around 5 p.m. or 7 p.m. and so we’ll still have both ends of the day still on the courts.”

The Pickleball Club remains the largest organization in the Village and has continued to grow, even through the limitations of the COVID-19 pandemic.

The club has more than 700 members and interest in the sport continues to trend upward. The club, along with the Tellico Village POA Recreation Department, held the second of three “drop-in” practice sessions Monday for new or inexperienced players to try the sport.

The final session will be 4-6 p.m. Saturday at the Wellness Center courts.

“We’re just really getting started on it, and it’s really kind of two things because we’re on our quest to build our PicklePlex, which is a covered facility,” Hyne said. “As you know, Tellico Village continues to grow by leaps and bounds and there’s always people coming through here looking at buying property, and we’re getting all kinds of interest from people who have played before or want to know more about it.

“We’re trying to set up different times — us and the PicklePlex committee — to allow people to come up, get a basic experience of the game, get a basic understanding of what it is and so people can see it, kind of live it, hold a paddle, hold a ball and see if it’s something they want to try,” he added.

As players join the club, they are evaluated and placed in respective playing levels to provide more equal competition.

“For those people that are moving into the Village, we have an evaluation process and an orientation process so that we attempt to get them to get them as closely aligned with players of their like skill level,” Hyne said. “We do that so that it can be very competitive at different skill levels, and we want to make sure people are matched up appropriately. As we’re coming out of this crazy time with the pandemic, I think what we’re going to see is more and more people coming forward and showing interest. It’s a perfect time to be out there playing.”

The PicklePlex project has been a major point of conversation between members and the POA since the club’s ribbon cutting ceremony Sept. 8.

The project is expected to total $300,000, and funding is being spearheaded by the Tellico Timeless Foundation. The Pickleball Club presented a $15,000 check during the ceremony to kick off the effort.

Simon Bradbury, POA recreation director, said an evaluation is ongoing for a specific design of the covered courts.

“We’re waiting on a design to come back in, and they’ll see some people this week and looking at design works for the phase one,” Bradbury said. “I hate to say we’re breaking ground because we’ve got to do that, and then we have to put it out for bid. Then we’ll know the exact pricing and who’s actually going to do the work. Right now is the design to make sure we get it built to specs. The Timeless Tellico Foundation paid for the design, which it was $10,000.”

One major shakeup is the club’s annual member-member spring tournament has been moved to the fall. However, club members will have an exciting opportunity to represent Tellico Village in a cross-community tournament against Fairfield Glade.

“What we did with the pandemic was we pushed everything back to the fall, so we’re probably going to have two tournaments at the end of the year,” Hyne said. “It’s the two neighborhoods and two of us get together and play in a playoff for the Tellico-Fairfield Cup. That’ll probably be the September, October time frame, and then we’ll probably have our member-member tournament sometime around the middle of October. We may actually use that for a fundraiser to gain some funds for our PicklePlex project.”