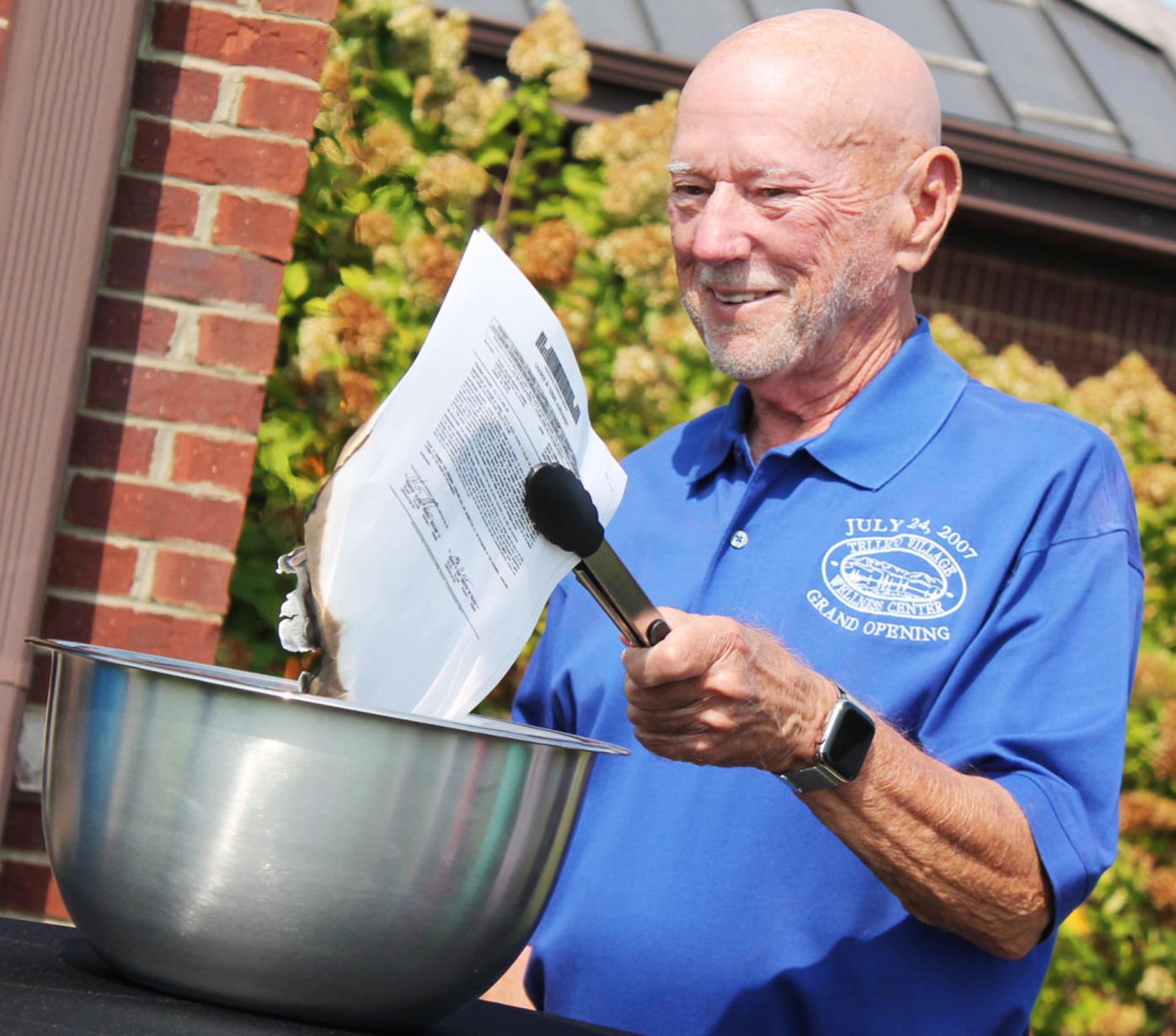 Bob Coates participates in a note-burning ceremony behind the Wellness Center. 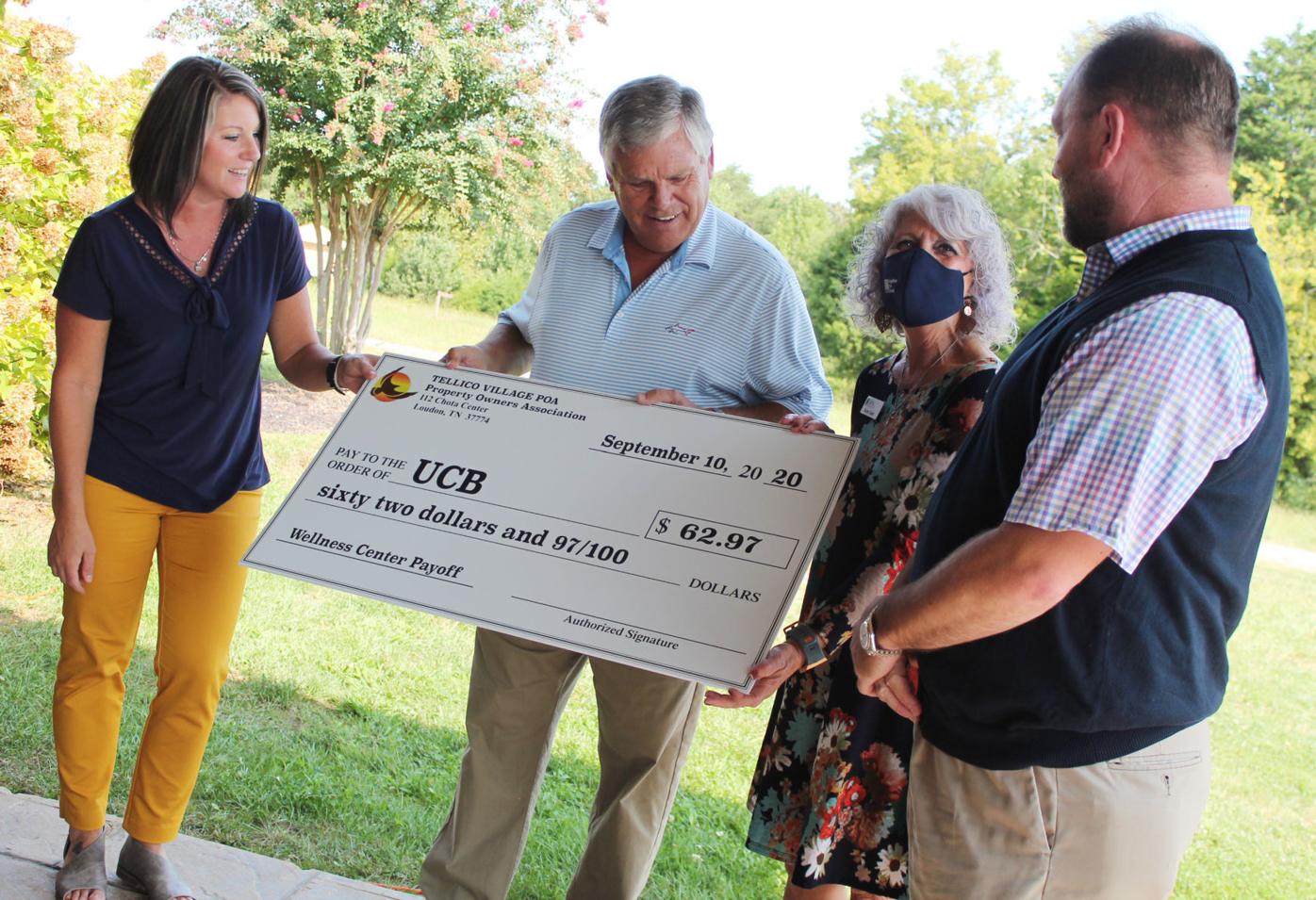 Bob Coates participates in a note-burning ceremony behind the Wellness Center.

Current and former members of the Tellico Village Property Owners Association Board of Directors celebrated Thursday an end to the years-long effort to pay off the Wellness Center.

One final payment of $62.97 in the form of a large check was given to United Community Bank representatives on a loan taken more than a decade ago. POA board members gathered around a metal bowl as board president Rick Blough lit aflame the note held by past president Bob Coates, who was leading the board when discussion on the facility first ensued.

“In early 2005, United Community Bank and the POA negotiated a $2.5 million construction line of credit,” Blough said. “In June, the POA board approved engagement of a design architect and the Architectural Control Committee gave the project its nod that October. The official groundbreaking ceremony occurred on Nov. 17, and the Wellness Center opened its doors to Villagers on July 24, 2007. At $4.1 million, it was and remains one of the biggest single undertakings by the POA in Village history. Because of the perseverance and foresight of that board of directors, the Wellness Center complex stands today as a jewel in our amenity offering.

Mitzi Lane, POA chief operations officer, said paying off the Wellness Center was a “milestone” for the POA.

“This was a first major loan that the POA had taken out for the creation of a new amenity, and a beautiful one it is,” Lane said. “This speaks volumes for the relationship that we as the POA have with United Community Bank representatives.”

Blough thanked former board members and POA staff for their dedication in making the Village a good place to live.

With the POA freeing up nearly $218,000 annually, Blough hopes the money will be used for “other TVPOA purposes.”

“Last year we had a major building project,” Blough said before the ceremony. “We constructed the Toqua clubhouse. ... We also built the Kahite activity center and portico, and when we did that we took our reserves down significantly. Basically our task for the next several years is to build the reserves back up.”

Coates came to Thursday’s ceremony with the same shirt he wore in July 2007 that commemorated the building’s grand opening. Coates credited United Community Bank and the 10-person facilities task force, a committee responsible for putting together a plan years ago, for helping make the project a reality.

“Our job was to put together, after all the surveys and studies had been done, we were put together a facilities plan, which determined what was finally going to be in the facilities plan at that time,” he said. “After we got done with that, then they said, ‘OK, now figure out what it’s going to cost and how we’re going to pay for it.’ So over one whole summer, meeting several days a week, we came up with a finance plan. I think we went through 20 iterations before we got there. But the finance plan involves some debt financing, which was new to the POA.”

Steve Hurst, United Community Bank board member, was bank president when the Wellness Center was first being considered.

“I’ve had a long history with Tellico Village,” Hurst said. “Actually, I financed one of the first houses that was built on the lake here when it first opened up. Then the POA graciously allowed us to participate with them and become one of our very best customers.”

Blough said Thursday was “all around a great day for Tellico Village.”