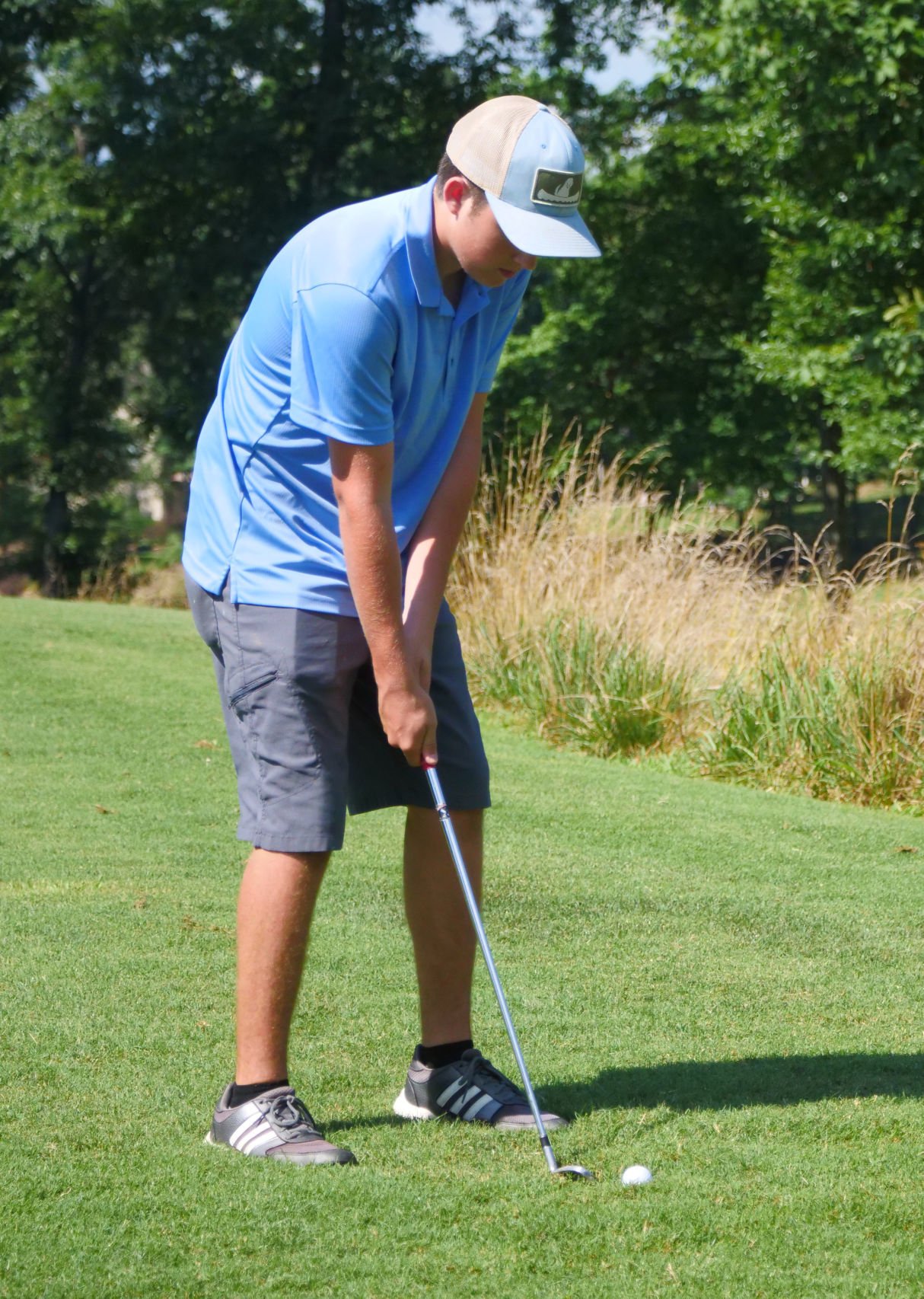 Alex Gaskins prepares for a chip Friday during a junior golf camp at Toqua Golf Course. 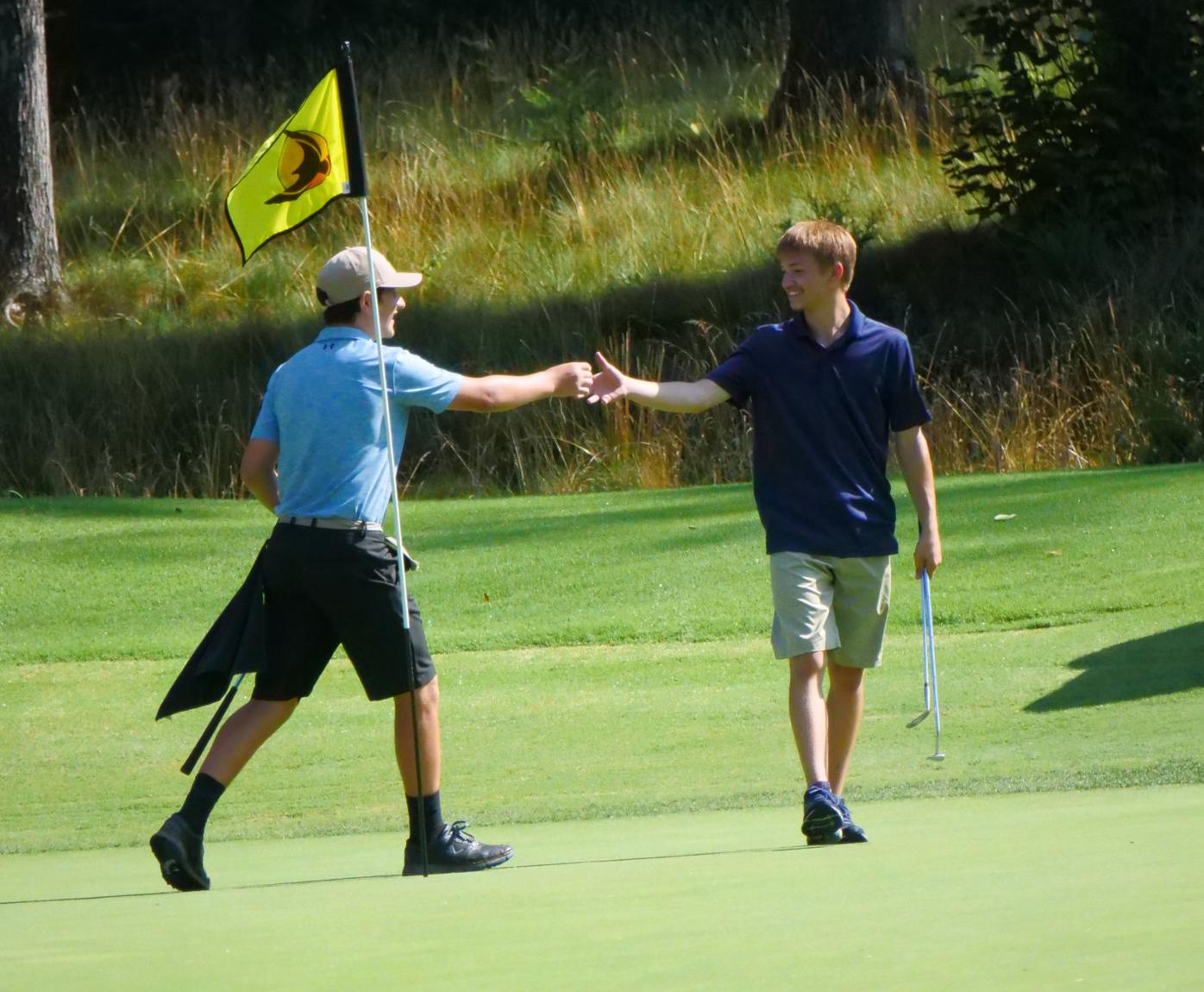 Jeremy Cherba, left, and Kyler Strange shake hands Friday after completing a round of golf during the junior golf camp at Toqua Golf Course.

Alex Gaskins prepares for a chip Friday during a junior golf camp at Toqua Golf Course.

Jeremy Cherba, left, and Kyler Strange shake hands Friday after completing a round of golf during the junior golf camp at Toqua Golf Course.

Young golfers from around the country descended on Tellico Village last week to participate in the annual junior golf camp at Toqua Golf Course.

The five-day camp kicked off July 6 and wrapped up Friday, allowing golfers put their skills to the test in team competition.

Casey Flenniken, Tanasi golf professional, was pleased with the turnout despite limitations.

“It was great and, obviously, this camp was very different in the fact that during COVID-19 we had some different restrictions that we had in the past,” he said. “We only had 40 kids whereas we’re used to 80 because we had to keep it under 50. We were able to do that and got more instructors involved in order to make groups smaller so that we could keep the kids, which was hard to do, but to keep them socially distanced from each other. We were able to do so and still run a productive five-day camp with a great tournament and great weather.”

Player safety was an important factor and the Toqua staff took precautionary measures.

“We kept our groups fairly small, and there were five per instructor,” Adam Jacob, Toqua golf professional, said. “We had a hand-sanitizing station out there and wipes and everything. We kept everyone 6 feet apart, so everyone had their own hitting station, their own golf balls, no one was touching anyone’s equipment and keeping their distance.”

Instructors taught every aspect of the game and tailored lessons to fit each age and skill group.

The camp also featured various games and fun activities throughout the week.

“We did driving, iron play, bunker play, chipping, putting and then we did some on-course work,” Flenniken said. “We built a 6-hole short course to let them learn the rules and etiquette of the game. Then we play some non-traditional stuff and mix up other sports and incorporate it into the camp so they can have some fun. We played golf hockey, golf baseball and then we use what sport they play and relate it to golf and how that relates to what they’re used to in their normal activity. They come back every year.”

Jeremy Cherba visited from Wisconsin to participate in the 13-17 age group.

He believes he will be able to apply what he learned from the camp and hopes to come back next year.

“I liked it because it improved my swing, my posture and everything,” Cherba said. “With golfing mostly before I came here, I would always hit water but now I’m going right over. I really liked the aspect of having a small group and having the pro be able to coach all of us but share everything.”

The majority of the junior golfers were from out of state.

“It was a blast,” Jacob said. “I mean, first and foremost, we were fortunate to have it and all the kids got here safely. I would say 90 or 95 percent don’t live in Tennessee, but it was a blast. We had two new faces, which is always good. Again, just keeping it fun in light form because their attention spans are a little less than some. It was a great time.”

The camp serves as an outreach program within the Village and Loudon County.

“Most of all of them are going to be grandchildren of the Villagers, and I don’t think we had a single kid that’s a member,” Flenniken said. “It’s huge because we do a good job of marketing it and getting the word out there. The numbers, historically, are always 80 so this time we had to cut it off. We had opened signups May 1, and usually it’s full by the first week. This year we weren’t able to do that because we had to keep it low, but it’s a great program. We try to make it fun, try to mix it up every year, and we were glad we got to pull it off this year.”