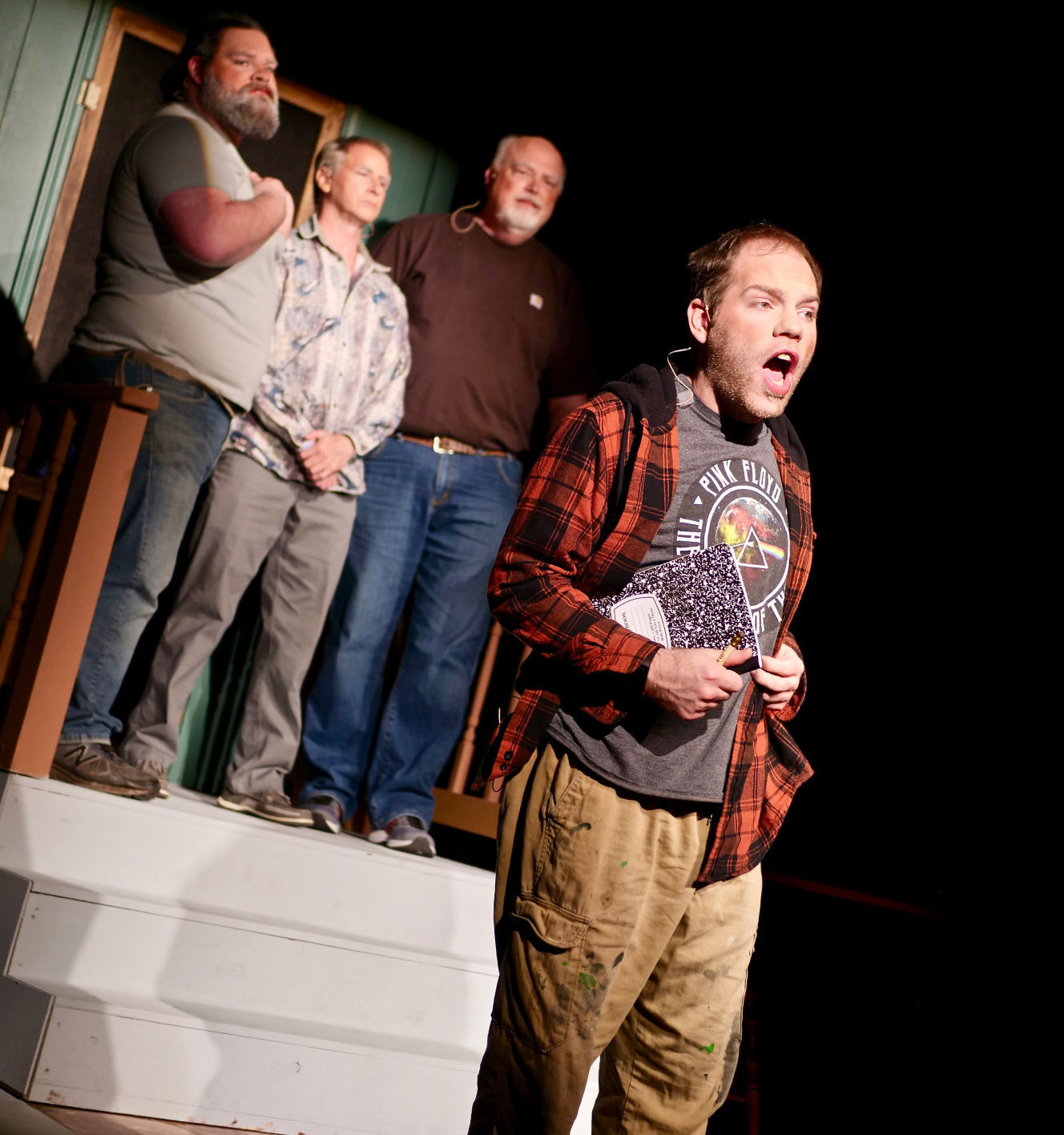 Cameron Cleveland, playing the role of B Flat, narrates a scene in ‘Second Samuel’ during a rehearsal at the Tellico Community Playhouse. 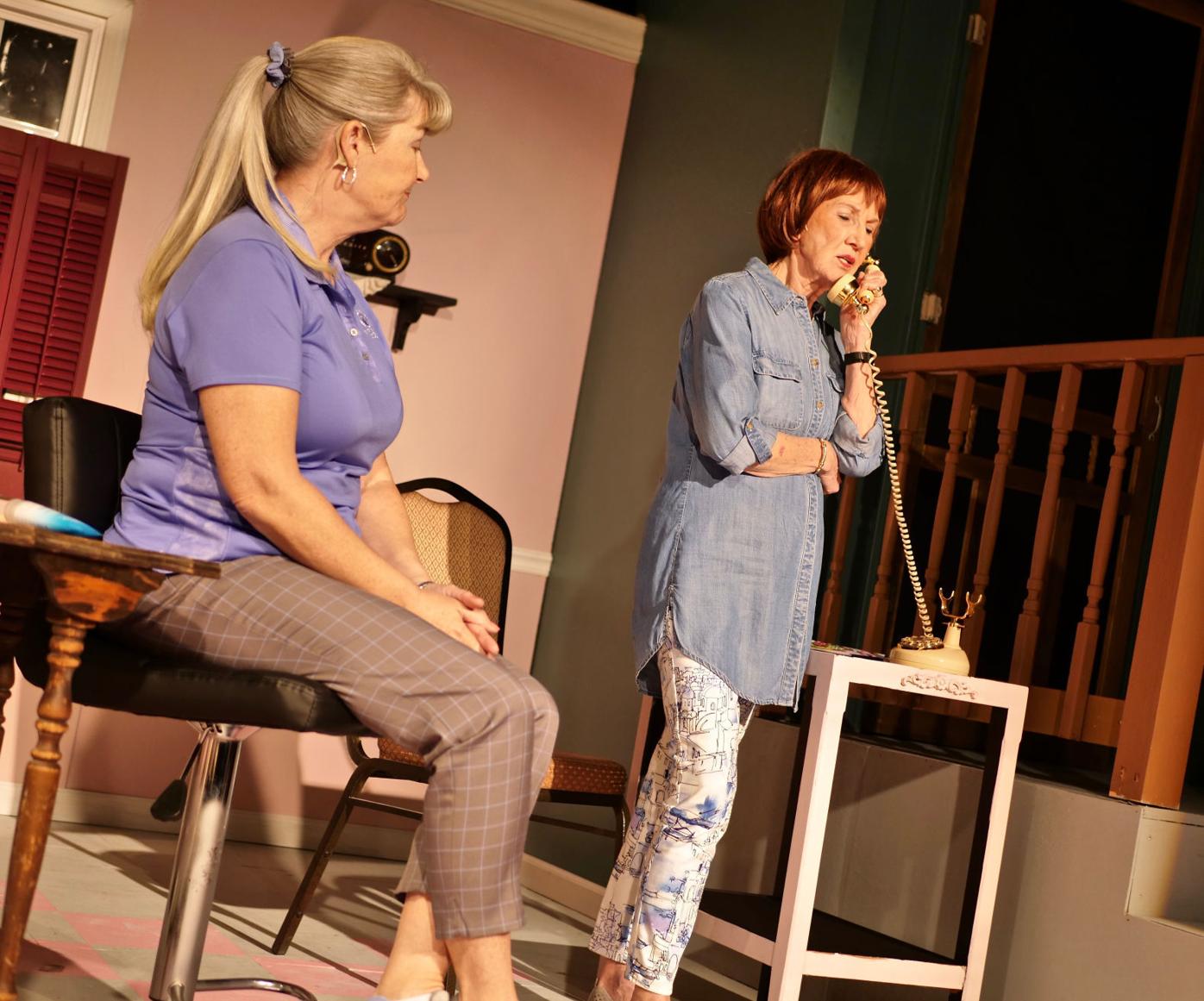 Lisa Dawn Maleske, left, playing the role of Dawn, and Ku Adams, as Omaha, perform a scene during a recent rehearsal at the Tellico Community Playhouse.

Cameron Cleveland, playing the role of B Flat, narrates a scene in ‘Second Samuel’ during a rehearsal at the Tellico Community Playhouse.

Lisa Dawn Maleske, left, playing the role of Dawn, and Ku Adams, as Omaha, perform a scene during a recent rehearsal at the Tellico Community Playhouse.

After more than a year of being shut down due to the COVID-19 pandemic, the Tellico Community Players are excited to get back on stage for the first production of the 2021 calendar.

Georgia playwright and Pulitzer nominee Pamela Parker’s “Second Samuel” is a colorful story set in the late 1940s that unravels “what happens when a small town discovers the big secret of one of its most beloved and recently deceased citizens, Miss Gertrude.”

“We recognized this play four years ago when we wanted to do it,” Len Willis, play director and TCP business manager, said. “It’s a very, very loving theme-type play that has a lot of twists and turns. The theme is marvelous and it dates back to the 1940s in a small town in south Georgia, and the issues they faced back in the ‘40s are the same type of issues that we face every single day today.”

The play involves a “mentally challenged, big-hearted young man called B Flat” as the narrator and a “small-town doctor who takes no nonsense, the ditzy and narrow-minded preacher’s wife, the nervous undertaker, the chatty hairdresser and the black man working in the local saloon.”

Cameron Cleveland will play the role of B Flat, whose character is comparable to Tom Hanks in the 1994 movie “Forrest Gump.”

Eight players of the 11-member cast are new to the TCP stage, including Bailey Dufty, who plays the role of Mansel Dean — a typical “guy next door” whose simple views of life are challenged as the play progresses.

“The script describes him sort of as a harmless redneck and when you think about southern America, especially in this time, he’s pretty much the poster child of what you think about that,” Dufty said. “I think he’s achieved what he’s wanted to in his life and at this point he’s on cruise control, really trying to take it easy a little bit with his wife and kids. Something happens that really kind of disrupts that for him, and he really has to start thinking about things he’s never ever thought about in his life. I really like this play because it’s really funny, it’s fun but it’s also serious at the same time because it tackles a lot of stuff.”

The play’s overarching theme is about loving your neighbor like yourself.

“It’s about acceptance, understanding and racial situations, but the play doesn’t preach to you,” Willis said. “The audience is going to love the play because it’s funny and the way the issues are brought out, it makes you think and I think the audience will leave here saying, ‘You know, that was good. I really enjoyed that.’ The reason we haven’t done it in the last three years after we identified it is because it requires certain cast members that in Tellico Village aren’t defined, such as young people, minorities and things of that nature are not very apparent here.”

Willis contacted several local community theater groups when looking for actors and believes this is one of the best casts he’s worked with in nearly 20 years of production.

“We’ve made contacts and worked with other theaters in the area and now with my cast, I couldn’t be any more proud of them there,” he said. “They are really good. The play is not a comedy, but the lines they say and the lines they normally would say living in a south Georgia town in the 1940s is tremendously funny, even though it’s not meant to be funny when they say it. They deal with the issues and I think at the end of the play, everyone will be happy.”

New cast members have enjoyed working with the Players and hope to earn more roles in future productions.

“It’s been a lot, a lot of fun,” Dufty said. “I’ve done a lot of stuff with community theaters and I don’t want to put anybody down, but I was for sure surprised with the level of skill here. All of my cast mates are simply excellent when it comes to they’ve learned all their lines, they’re already so deep in their characters that I’m having to play catch up. They’ve all been so accepting from the new people to the people that have been doing this here for like 20 years.”

The Players are ecstatic to finally be able to return to the stage after a yearlong absence, and Willis believes the rollout of new COVID-19 vaccines have played a big role.

Seating will be limited in the Playhouse and available seats will be identified in an online seating diagram.

Masks will be required, and patrons’ temperatures will be taken upon entering. Hand sanitizer stations will be placed in high-traffic public areas of the theater, while seating areas will be sanitized before and after each performance.

“This is our first live production in our theater since February of last year,” Willis said. “None of us are paid — we’re all volunteers. That’s because we love theater and so how was the last year? It was very disappointing, it was very wishful thinking in terms of thinking that every month something was going to happen, the vaccine was going to come out and then all of a sudden we’d be saying, ‘We’re going to do our show.’

“The board then decided after the vaccines came out and the work we had done to protect our cast, the audience and the crew with our filtration system, our checking temperatures, requiring masks to be worn and the board voted to do our April play with limited seats,” he added.

The play will run April 8-11 and 15-18 at the Tellico Community Playhouse. All shows will begin at 7:30 p.m., except for the matinees April 11 and 18, which will begin at 1:30 p.m. Reserved seats are $21 and purchases can be made online at https://www.tellicocommunity playhouse.org/.

Immediately after each of the Friday performances, the audience is invited to remain in the theater for a 30-minute talk-around with the cast and crew. Audience members will have the opportunity to ask questions and gain insight into what is involved in creating a character and putting on a play.